CARDIFF, United Kingdom (AFP) - The sister of Argentinian footballer Emiliano Sala, whose plane disappeared near the Channel Islands, vowed on Friday (Jan 25) that she would "never stop" looking for her brother despite rescuers ending their search.

"We miss him and we know he's here," Romina Sala told a press conference in Cardiff, the Welsh city whose Premier League football team had just made Sala their record signing.

"We came looking for him and we're going to take him back with us," she added.

Argentinian superstar Lionel Messi urged investigators Friday to resume the search after police called off rescue operations and admitted the chances of finding him were "extremely remote".

Police from Guernsey abandoned the search on Thursday after the light aircraft taking the player to Wales disappeared from radar near the island on Monday.

The missing player's sister echoed Messi's call, saying it was her "priority" to restart the search.

"Emi and the pilot are here and we can't leave them," she said. 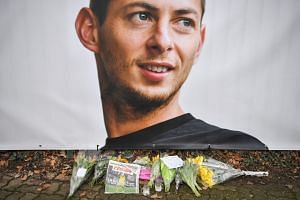 She thanked Messi, Argentinian teammate Sergio Aguero and fans for their support, calling on her brother to show his fighting spirit.

"He is a fighter, Emiliano started when he was very young and has always fought.

"All he wanted was to play football and fulfil his dream."

Her family plans to continue the search "until the very end", she explained, breaking in to tears.

"I want to find my brother...and I have faith that we will find him."

Sala's family have asked his former club Nantes not to commemorate their former teammate at this weekend's French Cup clash with third-tier Entente Sannois Saint-Gratien.

"We ask you to respect the family who absolutely refuse to talk about mourning and ask us to keep believing," Nantes captain Valentin Rongier told more than 300 Nantes fans who came to an open training session on Thursday.