SINGAPORE - When Akbar Nawas took over as head coach of Chennai City last year, the Indian football club had only three games to stave off relegation from the I-League.

They beat Churchill Brothers 3-1, lost 7-1 to East Bengal, before securing safety with a 2-1 win over Minerva Punjab in their final match.

With 13 wins, four draws and three defeats, they amassed 43 points, one ahead of second-placed East Bengal.

It is believed that the duo are the first Singaporean coaches to win a professional football league title outside of South-east Asia.

And they did it in swashbuckling style, scoring 48 goals in 20 matches, and never relinquishing their place at the top of the 11-team league from the third match week.

The Times of India summarised their triumph as "befitting their dominant campaign, the fulcrum of which was a sustained possession-based football".

Akbar, 43, told The Straits Times: "It is a great satisfaction after accepting the challenge of taking over a relegation-threatened team, and then winning the league within a year.

"Our team perform best when we are chasing the game. Thus, we didn't panic when we were behind (against Minerva on Saturday). I told the team we must end every attack with a chance at goal. I was pretty confident we could bounce back and win like we had done before." 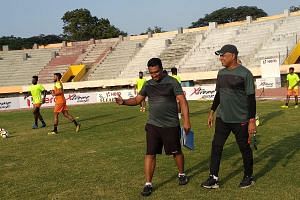 His sidekick Balagumaran, 54, added: "It is so overwhelming, I don't know if we are still in a dream.

"When we got here, the players we had were not from football academies, they were from the streets and so unpolished.

"Personally, it is also the highlight of my career, but I hope there is more to come, and I also hope this opens the door for more Singaporean coaches to venture abroad."

With the league win, Chennai are eligible for the 2020 AFC Champions League qualifiers.