SINGAPORE - Over two decades after the idea of a joint Asean bid for the World Cup was first mooted, the project has been given a fresh lease of life with Thailand's Tourism and Sports Minister Phiphat Ratchakitprakarn announcing on Wednesday (Oct 9) they would be leading a joint five-nation bid to host the 2034 tournament.

The other four nations are Singapore, Indonesia, Malaysia and Vietnam, said a report in the Bangkok Post.

The proposal for a joint bid was agreed at the fifth Asean Ministerial Meeting on Sports in Manila on Wednesday.

Among the attendees at the four-day meeting were government and sports officials from the 10 nations and Japan, including representatives from Singapore's Ministry of Culture, Community and Youth (MCCY).

In June, Thai Prime Minister Prayut Chan-o-cha made headlines in the region and set social media abuzz after he announced that South-east Asian countries would jointly bid to host football's biggest extravaganza in 2034.

He made the declaration after meetings between leaders at the Asean Summit in Bangkok.

The idea of a joint Asean World Cup bid was first mooted in 1996, when it was raised by then Minister for Community Development Abdullah Tarmugi and positively received by the Asean Football Federation.

It was revived in 2011 and again in 2017, but no official bid was submitted and the excitement eventually fizzed out.

This is the first time that Singapore has been named as part of the joint bid led by Thailand, and the Bangkok Post reported Phiphat as saying the participants at the meeting had agreed his country would play the leading role and he would seek approval from the Thai cabinet.

If Asean does make a bid to host the 2034 World Cup, it can expect fierce competition from other countries who have shown interest in staging the quadrennial tournament. 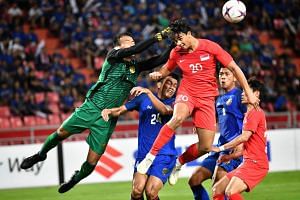 Football: Many challenges but Asean World Cup bid for 2034 will boost region on many fronts

They include China, Egypt, Nigeria, Zimbabwe and joint bidders Australia and New Zealand.

The last time the World Cup was co-hosted was in 2002 in Japan and South Korea, with the 2026 edition to be held in Canada, Mexico and the United States.

While there are no details on whether Asean will field a joint team for the 2034 World Cup if the bid is successful, the Football Association of Singapore (FAS) had revealed in August its ambitious plan to qualify the national football team for the Cup final in 15 years' time.

The Straits Times had reached out to MCCY and FAS for comment.