LONDON (REUTERS) - The proposed takeover of Premier League club Newcastle United by a Saudi Arabian-backed consortium collapsed after the group announced on Thursday (July 30) they were ending their interest in the deal.

The decision came after a lengthy scrutiny process from the Premier League which faced pressure to block the deal due to concerns over alleged broadcast piracy in the Gulf state.

That triggered the Premier League to carry out an examination of the proposed takeover as part of its "owners and directors test", which evaluates the suitability of ownership groups and usually takes a matter of weeks.

The Premier League did not immediately respond to a request for comment but the consortium blamed the length of the evaluation for the decision to withdraw.

"Unfortunately, the prolonged process under the current circumstances coupled with global uncertainty has rendered the potential investment no longer commercially viable," they said.

The league's chief executive officer Richard Masters suggested last month that the proposed takeover had become complicated but did not specify why, citing the confidential nature of the process.

The consortium's nearly three-month long wait was accompanied by intense lobbying against the takeover with human rights groups raising objections.

But one of the key issues raised by critics of the proposed deal was Saudi Arabia's response to cases of unauthorised broadcasting of Premier League games in the country - part of a long-running dispute between the kingdom and neighbouring Qatar.

Last month, a World Trade Organisation (WTO) panel told Saudi Arabia it had breached global rules on intellectual property rights by failing to prosecute a pirate broadcaster of sports and movies in a dispute with Gulf neighbour Qatar regarding the BeoutQ channel, which broadcast Premier League games.

"Saudi Arabia has a strong record of protecting intellectual property and is committed to applying its national law and procedures in full conformity with WTO rules," Saudi Arabia's mission to the WTO said in a statement.

The issue, however, was one that concerned the Premier League directly. 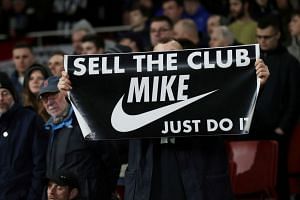 In January, 2019, the league had announced it had appointed legal counsel in Saudi Arabia to bring action against those involved in what it called "highly organised and sophisticated illegal broadcast piracy".

The dispute with Qatari-owned BeIN Sports, which holds the rights to broadcast the Premier League across the Middle East but has been barred from broadcasting in the kingdom, took another turn this month.

The Saudi General Authority for Competition (GAC) said it had permanently cancelled the licence of the broadcaster, a surprising move given the talks with the Premier League.

The investor group did not mention the dispute in their statement saying that the progress of the bid had been "complicated by a lack of clarity on the circumstances under which the next season would start and new norms that would arise for matches, training and other activities".

"As often occurs with proposed investments in uncertain periods, time itself became an enemy of the transaction, particularly during this difficult phase marked by the many real challenges facing us all from Covid-19," they added.

But a source close to the bid said they believed the Premier League had been influenced by the BeIN Sports issue and political considerations.

The source said that as well as the purchase of the club, the consortium planned to put £250 million into the club over five years and invest in the local community.

Amanda Staveley, the British businesswoman behind PCP Partners, told Reuters she was upset for the club's supporters.

"It's awful. We are devastated for the fans. We really thank the fans - I personally thank them for all their support," Staveley said.

The collapse of the takeover left Ashley in continued control of Newcastle, although British media reports have suggested there may be interest in the club from US investors.