LONDON (AFP) - A minute's silence was held before Cardiff's first match on Tuesday (Jan 29) since the plane carrying the club's record signing Emiliano Sala disappeared over the Channel Islands over a week ago.

After completing a £15 million (S$26 million) move from Nantes on Jan 19, Sala was on his way from France to take part in his first training session with Cardiff two days later when the aircraft carrying the Argentine and pilot David Ibbotson lost contact.

Visiting Cardiff fans at Arsenal's Emirates stadium unveiled a banner reading: "We never saw you play and never saw you score but Emiliano our beautiful bluebird we will love you forever more."

The captains of both sides laid a bouquet of flowers on the pitch before kick-off, while Argentina shirts and flags were waved among the visiting support.

Cardiff manager Neil Warnock described the past week as the toughest of his career having helped broker the deal that brought Sala to the club.

"I've been in football management for 40 years and it's been by far the most difficult week in my career, by an absolute mile," said Warnock on Monday.

"It's been a traumatic week and even now I can't get my head around the situation. It's probably hit me harder than anyone else as I've met the lad and talked to him for the last six to eight weeks." 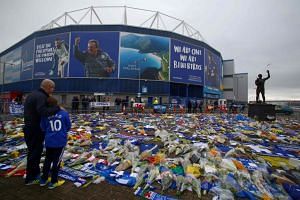 Football: Sister will 'never stop' search for missing Sala as rescuers give up

Guernsey police suspended the official search for the plane on Thursday, but a privately-funded search has continued.

In Arsenal's match programme, Gunners club captain Laurent Koscielny compared the game to his experience of representing France against England in the wake of the Paris terrorist attacks in 2015.

"It is hard to get into the game at times. You have to be professional, but you also feel the emotion, the sadness around you," said Koscielny.

"There are things far more important than football and you don't know what tomorrow will bring. I am very happy that the searches are now continuing."