MILAN (AFP) - Aaron Ramsey starred as Juventus beat title rivals Inter Milan 2-0 on Sunday (March 8) to reclaim top spot in Serie A in a game played behind closed doors due to the coronavirus outbreak.

Earlier in the day, Italian sports minister Vincenzo Spadafora called for the league season to be put on hold.

His statement caused chaos at the early game between Spal and Parma, with confused players sent back to the dressing rooms from the tunnel before eventually taking to the field 75 minutes after the scheduled kick-off.

Juventus' game against Inter in Turin did go ahead, although in an empty Allianz Stadium, with the defending champions taking a one-point lead over Lazio at the top of the table with 63 points.

"It's all a little strange and sad to play football in these conditions, sad for the fans and the players," Juventus director Fabio Paratici told Sky Sport Italia.

"We trained in the empty stadium yesterday to get accustomed to the situation, but to be honest, I don't think we can ever really get used to it."

Reports in Italy late on Sunday suggested that the Serie A season could even be suspended on Tuesday once government officials have met with league and player representatives.

"Our position is that Juventus will respect what the authorities indicate," added Paratici. 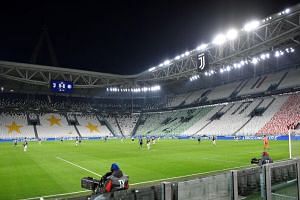 "We all understand that this is the situation and we must behave responsibly to help ensure it passes as quickly as possible."

Juve coach Maurizio Sarri told Sky Sport Italia that he "doesn't know what is the right thing to do" when it comes to the thorny question of cancelling matches.

"What have to I ask is whether it's right to take away two hours of enjoyment from those who are stuck indoors or if there really is a serious risk for the players and staff, I just don't know the answer to those questions," said the 61-year-old.

On the game itself, he added: "This is an important victory, but there are still 12 games to go, so it's a long road ahead."

Antonio Conte's third-placed Inter are now nine points adrift, but with a game in hand on Juve and Lazio.

Douglas Costa went closest in a tight first half, but was denied by an excellent save from Inter goalkeeper Samir Handanovic.

The hosts broke the deadlock 10 minutes after the break, as Cristiano Ronaldo got to a low ball first inside the box, with it then falling kindly for Ramsey to sweep a low shot into the net from close range.

It was the Wales midfielder's fourth goal of the season after joining from Arsenal last year.

Inter substitute Christian Eriksen went close to pulling one back when he drilled a shot narrowly over the crossbar.

Things went from bad to worse for the away side when Daniele Padelli, sitting on the substitutes' bench, was shown a red card for dissent.

'FIGC should consider stopping Serie A'

The climax of the season remains uncertain, though, after a deadly outbreak of the new coronavirus in Italy which has claimed the lives of over 350 people.

Italians woke up to discover the entire Lombardy region around Milan and other parts of the north in which a quarter of all Italians live - and most big teams play - under lockdown.

Italian Footballers' Association president Damiano Tommasi tweeted that "stopping football is the most useful thing for our country right now".

"The teams to cheer are playing in our hospitals, in emergency rooms," he wrote.

Mr Spadafora quickly sounded his own support for the idea of suspending the season right away.

"The FIGC (Italian Football Federation) should consider immediately STOPPING Serie A," he wrote on Facebook.

Elsewhere on the pitch, veteran Zlatan Ibrahimovic's fourth goal since returning to AC Milan could not prevent the seven-time European champions from slipping to a 2-1 loss at home to struggling Genoa. Milan are seventh on 36 points.