SINGAPORE - Paul Pogba. Paulo Dybala. Christian Eriksen. Wilfried Zaha. Perhaps a transfer window where over £1 billion (S$1.67 billion) was spent was defined by the deals that didn't happen. Across England, there may be clubs rueing the ones who got away.

Tottenham did not get a flagship forward in Dybala. Manchester United, who also talked to the Argentinian, did not get an elite attacker or an extra midfielder.

Manchester City did not get a centre back to replace Vincent Kompany. Everton's latest summer of scatter-gun spending did not bring Zaha or Abdoulaye Doucoure.

Liverpool did not get anyone, apart from two youngsters and a reserve goalkeeper, in Adrian. Labouring under a transfer ban, Chelsea could not buy, but somehow got the worst of both worlds by still spending £40 million on the ineffective loanee Mateo Kovacic.

For different reasons, Chelsea and Liverpool look potential losers from the window.

The Londoners have lost far and away their outstanding individual, Eden Hazard. The Merseysiders could discover that those who stand still in effect go backwards, though Jurgen Klopp will look for improvement from within.

Perhaps the surprise winners were a club who long looked like losers, in Arsenal. Their £72 million move for Lille winger Nicolas Pepe was not just the biggest signing for an attacker, but a coup. They weakened Chelsea with their late, shock move for David Luiz, they eventually got the left back they long wanted in Celtic's Kieran Tierney, and they borrowed a top midfielder in Real Madrid's Dani Ceballos.

United kept Pogba but otherwise can lament the deals that did not happen and savour those that did: getting rid of Romelu Lukaku, in return for £74 million, and getting three players they wanted. Daniel James is a winger of real potential and, while they paid over the odds for both the £45 million right back Aaron Wan-Bissaka and the £80 million centre back Harry Maguire, now the world's most expensive defender, each was Ole Gunnar Solskjaer's top target in his position. 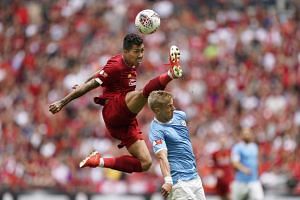 Football: Five key Premier League matches to watch in the coming weeks as season kicks off

But the Premier League eschewed Galactico, vanity signings. Its best buys are bought to a plan, to suit a system.

It is why Tottenham did well. Ryan Sessegnon should add dynamism on the left flank and is a player Mauricio Pochettino can mould. Tanguy Ndombele fills the void Moussa Dembele left when he declined and departed, as the ball-carrying midfielder.

There has been the same logic to City's business and Rodri looks the defensive midfielder they needed, ending a long search for Fernandinho's eventual successor. Few can be both ball-winner and pinpoint passer in Pep Guardiola's system. Rodri should.

Many of the finest signings promise a decade's service. James, Wan-Bissaka, Sessegnon, Ndombele and Rodri are the opposite of damaging short-termism.

So are three of the most exciting arrivals - Youri Tielemans, the classy passer who excelled on loan for Leicester before they bought him, Pablo Fornals, the Villarreal playmaker who went to West Ham, and Moise Kean, the explosive 19-year-old striker who looks Everton's most astute move.

There is a group of older players who look safe bets. Gary Cahill's free-transfer move to Crystal Palace, Jay Rodriguez's return to his hometown club Burnley and Tom Heaton's purchase by Aston Villa.

Villa spent over £130 million. If they go down, that spending spree will look misguided. And the foot of the table is where deals, or even a lack of them, could cost most.

Norwich spent around only £1 million on transfer fees. Newcastle lost their two top scorers and paid £40 million for Joelinton, who has never got more than eight league goals in a season. He is one for the future, but if that future is in the Championship, that decision making will feel disastrous.