In a statement, the Middle East emirate's Supreme Committee for Delivery and Legacy said it "rejects each and every allegation put forward by the Sunday Times".

"We have been thoroughly investigated and have been forthcoming with all information related to our bid, including the official investigation led by US attorney Michael Garcia," it said.

"We have strictly adhered to all Fifa's rules and regulations for the 2018/2022 World Cup bidding process."

Fifa, which has just emerged from what was widely regarded as a successful hosting of the World Cup by Russia, for its part said in a statement that "a thorough investigation was conducted by Michael Garcia and his conclusions are available in the report".

The newspaper - which also made allegations in 2014 about Qatar buying the vote but of which they were subsequently cleared after a two-year long Fifa investigation led by American lawyer Michael Garcia - says e-mails leaked to them by a whistle-blower from the bid team show they paid a US-based office of a public relations firm as well as former CIA agents to disseminate "fake propaganda" concerning main rivals Australia and the United States during their campaign to host the 2022 competition.

Qatar, to general surprise, beat the Australian and US bids as well as South Korea and Japan, to the right to host the quadrennial football showpiece. Russia was awarded the 2018 edition at the same time, seeing off, among others, England. 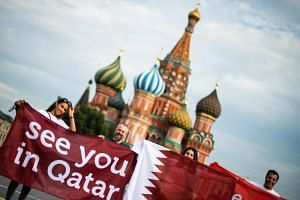 Football fans can watch up to 2 or 3 live games a day at 2022 World Cup in Qatar, say organisers​

A World Cup held in November and December? Looking ahead to Qatar 2022

The gas-rich Gulf state's strategy was to recruit influential individuals in order to attack bids in their respective countries, creating the impression there was "zero support" to host the World Cup among the population, the paper said.

One of the core criteria considered by Fifa is said to be that the bids should have a strong backing from domestic populations.

Bidders are also prohibited from making "any written or oral statement of any kind, whether adverse or otherwise, about the bids or candidatures of any other member association" under Fifa guidelines.

But one of the leaked e-mails the Times claims to have obtained was sent to Qatar's deputy bid leader Ali al-Thawadi, and allegedly shows the state was aware of plots to spread "poison" against other bidders in the running before Qatar won the right to host the World Cup in December 2010.

Such actions went as far as planning a resolution for US congress on the "harmful" effects of the American World Cup proposition during the week of the vote, as well as approaching and paying a US professor US$9,000 (S$12,300) to compose a report on the economic burden the competition would present.

In June 2018, the US, Canada and Mexico won a joint bid to host the 2026 edition. They received the nod over Morocco's fifth unsuccessful attempt.