DOHA (AFP) - Of all the problems faced by Qatar's World Cup, rainfall was probably the very last issue tournament organisers in the desert state expected to deal with.

But severe flooding caused by a year's worth of rain has again raised questions over the ability of Qatar's infrastructure - much of it being put in place for 2022 - to cope with such conditions.

Average rainfall for Qatar is 77mm. For the month of October, the average is just 1.1mm.

In Education City, a Doha suburb where a 2022 World Cup stadium will be located, official figures showed that an astonishing 98mm of rain fell.

A contrite public works authority, Ashghal, tweeted its apologies saying it was "sorry for the effects caused by the recent heavy rainfall".

"If you get heavy rain in the desert it often floods quite quickly because the sand is baked hard in the sun and there's not much vegetation (to help with drainage)," Steff Gaulter, a senior meteorologist with Al Jazeera. 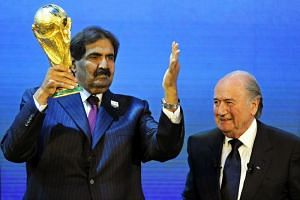 She added more research was needed to see if the weather experienced by Qatar was down to climate change or weather patterns caused by El Nino.

The conditions were extreme for Qatar, but the worry for tournament organisers is that neither the weather nor the impact on infrastructure, in a country spending US$500 million (S$691 million) a week to prepare for 2022, were unprecedented.

In November 2015, Qatar's prime minister launched an investigation after heavy rains exposed poor construction during similar amounts of rainfall, some of it falling inside Doha's Hamad International Airport.

Exactly a year later, Qatar was hit again. This year's floods were the third in four years, close to or at the time when it will host the World Cup in 2022.

Governing body Fifa moved the tournament from its traditional June/July date to take place between Nov 21 and Dec 18, 2022.

This was, ironically, because of concerns over the extreme Qatari heat, which regularly tops 40-plus deg C during its summer.

Any matches taking place in 2022 confronted by similar conditions to last weekend could be delayed or postponed because of transport access to the grounds, despite a still-being-built Metro system.

The only World Cup venue so far completed, Khalifa International Stadium, was not badly impacted by the floods, workers there told AFP.

A spokesman for Qatar's World Cup organising body, the Supreme Committee for Delivery & Legacy, said "the proposed venues for the 2022 Fifa World Cup Qatar were largely unaffected with minimal disruption".

But he added the rain has helped organisers "identify areas for necessary improvements".

The chances are that Qatar's World Cup will emerge unscathed when it comes to rain in 2022.

The conditions were extreme, but they were extreme for Qatar, where the average rainfall during November and December is still only 15mm.

But having dealt with concerns over corruption, human rights, diplomatic, heat and an expanded World Cup, Qatar 2022 now finds itself worrying about rain.