SINGAPORE - Premier League chief executive Richard Scudamore has hailed the success of the Barclays Asia Trophy, which ended on Saturday at the National Stadium.

He also said the league has "every reason" to hold the biennial tournament here again.

"This past week in Singapore highlights what makes the Barclays Asia Trophy and the Premier League so special; excellent football, played competitively in a full and vibrant stadium.

"We saw the best of the Premier League in the commitment of Arsenal, Everton and Stoke City. I know they were blown away by the reception that they received from fans and the people of the Lion City.

"Singapore has given us every reason to seriously consider returning in the near future."

The competition saw the largest cumulative attendance in its 12-year history, with a record turnout of 81,974 over two match-days. 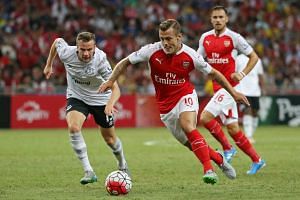 Arsenal beat Everton 3-1 in front of 52,107 fans at the National Stadium in the final on Saturday. It was both a record attendance for the venue, which opened last June, and the tournament in a single match-day.

Off the pitch, the Premier League also held courses for local coaches and referees.

On top of these, it also gave the Football Association of Singapore $150,000 to help develop grassroots football.