Spain's build-up to the tournament was rocked last week when reports claimed goalkeeper David de Gea had been involved in a sex scandal.

But coach Vicente del Bosque showed his faith in the Manchester United shot-stopper by handing him the gloves ahead of legendary Iker Casillas.

Czech coach Pavel Vrba had suggested his men could produce a trick or two to counter the "genius" of del Bosque's side, who are desperate to make amends for their first-round exit, as defending champions, at the 2014 World Cup.

But after a nervous opening period on a rain-soaked pitch, Vrba's men had Arsenal keeper Petr Cech to thank for saving them during a Spanish masterclass.

Spain were frustrated throughout by the Czechs' stubborn defensive game, which finally fell apart when Pique got his head to Andres Iniesta's cross towards the back post where he beat Cech in the 87th minute.

It took Spain until the 16th minute to fashion their first real chance, right-back Juanfran sending David Silva through on the right flank for the Manchester City man to fire in a perfect delivery for Alvaro Morata.

Cech, however, was well positioned to block the Juventus striker's first-timer from close range. 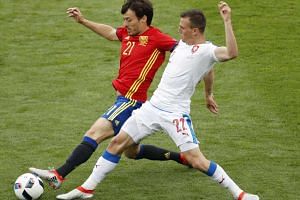 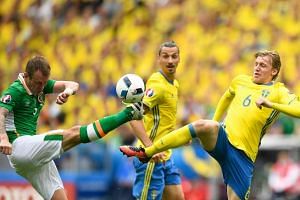 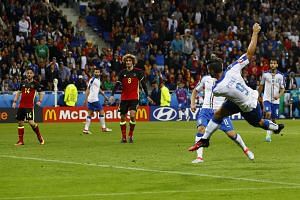 The Czechs were defending with plenty of heart and only a desperate sliding tackle from centre-back Tomas Sivok stopped Juanfran's short delivery reaching Morata as the Spaniards edged closer.

When Iniesta picked up a mis-hit clearance just outside the area to set up Morata, the Juventus striker feinted before flashing a low drive wide of Cech's far post on the half hour.

Iniesta recovered from a knock on the ankle and, with Cech off his line, sent an audacious chip from 35 yards metres wide of the post.

Cech was forced into action twice before the interval, the 'keeper diving to parry Jordi Alba's angled shot from the left side of the area then rushing out to block at the feet of Silva as he prepared to pull the trigger after being set up by Juanfran.

A counter-attack involving Czech captain Tomas Rosicky gave Tomas Necid the chance to test de Gea from the edge of the area but the 'keeper saved comfortably.

Cech came under more intense pressure in another one-sided half after the restart, the custodian desperately turning the deflection from a Morata pass around the post before blocking Sergio Ramos' effort from inside the area from the resulting corner.

The Czechs were given a sniff when Roman Hubnik got his to Ladislav Krejci's free kick from outside the area, but de Gea got down well to save.

And after Athletic Bilbao striker Aritz Aduriz came on to replace the misfiring Morata, de Gea had Cesc Fabregas to thank when he produced a spectacular overhead kick to keep Theodor Gebre Selassi's header out following a corner.

Fabregas was replaced by Thiago Alcantara soon after, and Spain's pressure intensified.

A delightful chip from Silva found Alba unmarked but his mis-hit shot was bundled out for a corner.

Minutes later, Silva was the welcome recipient as Spain zipped the ball around the area but the Ciy forward sent his left-foot effort wide of the target.

Aduriz's first real touch came on 76 minutes but his spectacular overhead kick was wide of the target.

Spain finally made the breakthrough three minutes from the end, but at the death they had dea Gea to thank for keeping out a dangerous shot by Vladimir Darida.