SAO PAULO (AFP) - The woman who has accused Brazilian football star Neymar of raping her in a Paris hotel has been dropped by a third lawyer - the latest twist in a scandal that has gripped the country.

Trindade alleges Neymar sexually assaulted her in the French capital last month, a charge he denies.

Garcia took on Trindade's lawsuit against Neymar last week, but days later, he reportedly said he was considering withdrawing from the case unless the model provided more evidence of wrongdoing.

The lawyer wanted to see the content of a seven-minute video filmed during the model's second meeting with the Paris Saint-Germain star.

Trindade maintains the recording - a few seconds of which have been leaked on social media - includes conclusive evidence that she was assaulted.

The images were filmed on a tablet device which has been stolen, according to Trindade, but the owners of the building where she lives have denied claims of a forced break-in. 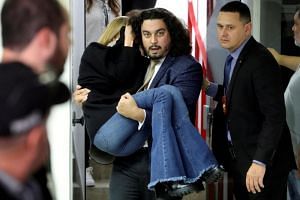 Trindade's original lawyers walked away from her case because she had initially filed a complaint of physical abuse and not rape. A second lawyer abandoned the case after briefly helping Trindade.

She gave evidence to Sao Paulo police last Friday and, after six hours of testimony, Garcia carried her out of the station.

"She says that according to the tablet's tracker, it would be in the same street as my office," Garcia told SBT.

"She was very emphatic and a client should not question the competence of a lawyer, much less one that leaves a police station carrying their client in their arms." Trindade's dramatic appearance came a day after Neymar went to a Rio de Janeiro police station - sitting in a wheelchair after injuring his ankle in last Wednesday's pre-Copa America friendly against Qatar.

He gave a statement in an investigation into his publication of intimate WhatsApp messages and photos of Trindade on social media without her consent.

Neymar told police that an assistant and a technician were responsible for sharing the messages and photos, TV Globo reported.

The star striker's injury has sidelined him from the Copa America, which begins Friday.