SINGAPORE - He envisions a pacy and attacking brand of football for the Lions, and new national coach Tatsuma Yoshida was quick to emphasise this philosophy to his players during his first training session on Monday (June 3).

The workout at the Jalan Besar Stadium consisted of a keep-ball rondo exercise followed by four-versus-two or six-versus-two passing and movement drills. He later divided the squad into two teams for a friendly game to work on tactical positioning.

At his unveiling last Thursday, the 44-year-old Japanese had admitted his English is limited, but he still managed to get his point across to his team, routinely shouting instructions like "faster", "together", and "take your position".

Yoshida, who was appointed on a two-year deal and replaces V. Sundram Moorthy, later told The Straits Times: "Today is okay, but I want more. The two objectives for today was to see the players' conditions and introduce some basic tactical principles such as attacking with width and keeping our defensive shape.

"I'm happy with the effort and hard work... but we have to improve a lot and the concentration needs to increase. I know it is the fasting month, so I will increase the intensity after Hari Raya.

"The quality is not too bad, but not very good. Some players have better technique, while some have not enough but make up for it with energy."

Despite limping due to a heel injury he sustained in Japan several weeks ago, Yoshida - with a constant smile - moved around the artificial turf and demonstrated what he expected from the drills. 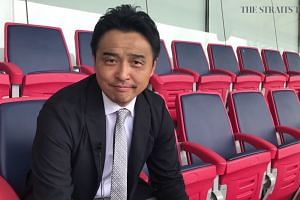 He was accompanied by Albirex Niigata Under-15s coach Ryo Ishibashi,serving as a translator, while assistant coach Nazri Nasir also bellowed instructions in Malay.

Yoshida said: "Football is all about coordinating your physical abilities with your thoughts, and I wanted the players' passing to be rhythmical.

"I want the players to be more aggressive in attack and in retrieving possession after losing the ball. If we want to be a ball-playing team, we need to have confidence first, the players must want the ball."

During the informal game, he was seen pulling winger Gabriel Quak aside to give more instructions. After training, Yoshida was also giving forward Adam Swandi pointers.

Quak said: "Despite his basic English, it was a good first training session in which he let the team know more about the style he wants.

"We focused more on passing in the small-group drills and practised the movements he wants us to replicate during games.

"During the two-sided game, he told me to hug the line. I think it's similar to Japan's style of stretching the opponents using width. The transition from defence to attack, and from attack to defence, is also important to him, and we can begin to see his attention to such details.

"At least to me, it seems like he does not favour the slow and patient build-up play and prefers us to play with more pace. He also doesn't want the long balls, unless we have managed to get our opponents to lose their shape."

The Republic face Solomon Islands and Myanmar in the upcoming friendlies on Saturday (June 8) and next Tuesday (June 11) respectively.

Besides the tactical fine-tuning, Yoshida also showed his human touch when he concluded the session under the scheduled two hours as most of his players are fasting.

Skipper Hariss Harun appreciated the gesture and said: "It is nice of him to try and understand our culture. We can tell he is trying his best to communicate with us in English, and with the translator, we had no big issues.

"As for the kind of football he wants of us - being organised and compact in defence, winning possession quickly after we lose it, and fast-paced attack - we need to be ready and work really hard because the faster we can adapt, the better it will be for the team."