LONDON (AFP) – Arsenal great Thierry Henry hailed Arsene Wenger’s legacy as “untouchable” despite struggles in recent years as the manager announced on Friday (April 20) he was stepping down after 22 years at the helm of the Premier League club.

The 68-year-old arrived at Arsenal in 1996 a relative unknown but leaves widely hailed as the greatest manager in the club’s history following three Premier League titles and a record-breaking seven FA Cup triumphs.

Wenger, who completed the Premier League and FA Cup double in his first full season in England, was hailed as an innovator in his early years and his spiky clashes with former Manchester United boss Alex Ferguson became the stuff of legend.

Yet, despite cup success in recent years, fans have become increasingly frustrated by the north London club’s inability to challenge the likes of Manchester City and Chelsea for the Premier League title and a failure to reach the sharp end of the Champions League.

“After careful consideration and following discussions with the club, I feel it is the right time for me to step down at the end of the season,” Wenger said in a statement posted on the club’s website.

“I am grateful for having had the privilege to serve the club for so many memorable years.”

Wenger arrived at the Emirates with Ferguson’s United at the peak of their powers but immediately threw down the gauntlet, winning the Premier League and FA Cup double in 1998, before repeating the feat four years later.

But perhaps the most remarkable achievement of his long reign was going through a full league season unbeaten in 2003-04, with his “Invincibles” playing a captivating brand of flowing football.

After an incredible 19 successive years in the Champions League, Arsenal, in sixth place in the Premier League, could miss out for the second consecutive year after a disappointing league campaign.

Their only realistic chance of qualifying for next season is by winning the second-tier Europa League – the Gunners face Spanish giants Atletico Madrid in the semi-finals – and Wenger has urged the fans to get behind the club. 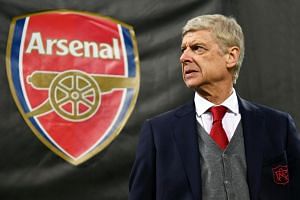 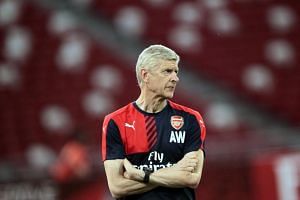 Football: 5 highs and lows of Arsene Wenger's near-22 year tenure as Arsenal manager

Arsenal’s all-time record goalscorer Henry said Wenger’s recent lack of success in the Premier League should not tarnish his legacy.

“Recently, people were always confusing what he is doing at the minute and his legacy,” Henry told Sky Sports. “Once you announce you are leaving people are going to talk about your legacy and his legacy is untouchable.”

“Let’s not get lost in celebrating the end of his era,” he added. “The team has to win the Europa League, it would be an amazing achievement and Arsene never won in Europe before so it would be a great way to give him a good exit.”

Ferguson, who retired in 2013, had warm words for his former adversary, saying he was “proud to have been a rival, colleague and friend” and hailing him as one of the greatest Premier League managers.

Current United manager and former Chelsea boss Jose Mourinho, with whom Wenger has had repeated run-ins, said he hoped the Frenchman he once labelled a “specialist in failure” would stay in football.

Arsenal’s majority shareholder Stan Kroenke paid tribute to a man of “unparallelled class”, with the club saying a successor would be found “as soon as possible”.

Nevertheless, Arsenal chief executive Ivan Gazidis said on Friday: “We are not going to find a replacement for Arsene Wenger for a variety of reasons.

“The football club is in a very different place than it was 22 years ago and it’s unthinkable to me we will have another manager in the Premier League, let alone Arsenal, who will be 22 years in tenure and have the kind of run of consistent success Arsene had over those years.”

Wenger took charge with Arsenal in the doldrums in October 1996, but quickly set about a revolution in English football by overhauling players’ diets and bringing an end to the drinking culture that had dogged the club.

Results soon arrived on the pitch as Wenger’s men beat an all-conquering Manchester United side to the title in 1997-98 and won the league again four years later.

Thank you for the memories, Arsene. pic.twitter.com/UWS1zjvtk5

Despite their constant presence in the Champions League Wenger was never able to end Arsenal’s quest to win the competition for a first time. They closest they came was in 2006 when a young side was edged out 2-1 in the final by Barcelona.

That season was also Arsenal’s final campaign at Highbury but the promise that moving to the 60,000-capacity Emirates would allow the club to compete financially with the biggest spenders in England and the continent failed to materialise.

Instead, Wenger was much criticised for his unwillingness to spend the money needed to keep up as booming TV revenues saw Premier League rivals splash the cash.

Arsenal even sold a host of star players such as Henry, Cesc Fabregas and Robin van Persie.

And the fans’ frustration continued to grow as, even after loosening the purse strings to buy Mesut Ozil in 2013 and Alexis Sanchez a year later, Arsenal still failed to compete for the title or the Champions League.