Sane, 23, was taken off clutching his knee during City's Community Shield win over Liverpool last Sunday, and there has since been uncertainty as to the severity of the injury.

On Thursday, both Kicker magazine and Bild newspaper reported that the German international had torn his cruciate ligament, casting fresh doubt over his impending move to Bundesliga champions Bayern.

Both reports claimed that Sane would be ruled out for several months, and suggested that Bayern may now pull back from making a bid for Sane.

Bayern had identified Sane as the primary target in their search for a long-term replacement for departing club icons Arjen Robben and Franck Ribery.

Having been slow to move in the transfer window this year, the German giants are under pressure to make a high-profile signing. 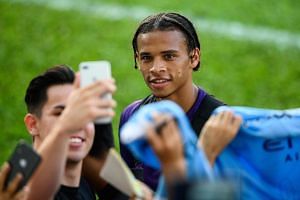 The Sane transfer had looked close to completion, with Kicker reporting last week that terms had been agreed on a €100-million (S$155-million) deal.

"The transfer will now have to be reassessed," the magazine wrote on Thursday.