SOUTHAMPTON, England (REUTERS) - Manchester United ground out a 1-0 Premier League win at Southampton as striker Romelu Lukaku scored his eighth goal of the season in all competitions and manager Jose Mourinho was sent off for dissent on Saturday (Sept 23).

The result ensured United equalled their best start to a Premier League campaign but left them second on 16 points from six games, behind leaders Manchester City on goal difference after their arch rivals thrashed Crystal Palace 5-0.

Mourinho, who was sent to the stands in the last minute of stoppage time as Southampton piled on the pressure in the closing stages, was glad to come away from St Mary's Stadium with three points after an unimpressive performance. 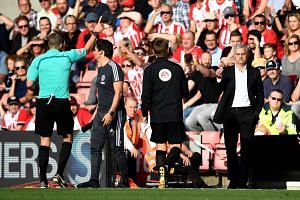 "It is not always possible to operate at high quality but we fought hard," Mourinho told Sky Sports.

"I felt some of the boys were not sharp. I didn't feel like we could score three or four goals, like we sometimes do, so the option was to make sure we got the points.

"Romelu Lukaku's work is so important for us. He scored his goal and worked hard, like everybody else."

He scrambled a 20th-minute winner, pouncing on his own rebound in the six-yard box after the home team's keeper, Fraser Forster, had parried the striker's close-range header following a superb cross from the left by Ashley Young.

United fizzled out in the second half as the Saints kept probing their defence and the home team's midfielder, Oriol Romeu, missed two good chances before substitute Ander Herrera blazed his shot over the bar at the other end.

Phil Jones was at the heart of United's rugged defending, with several telling tackles and interceptions, but the centre back also heaped praise on Lukaku, who has now scored six Premier League goals in as many matches.

"Romelu Lukaku needs one chance and sticks it in the net and we are thankful to have him," said Jones.

"We are happy with the three points, but not too happy with the performance. Maybe last season we would have come here and drew or lost it, but we need to do better than that."

Correction note: This story has been updated to correctly reflect the English Premier League standings.