Ranieri makes a surprise return to the English top-flight after emerging as the preferred choice of the club's Thai owners to replace the sacked Nigel Pearson.

"Leicester City football club is delighted to announce the appointment of Claudio Ranieri as the club's new First Team Manager," a statement on the club's website confirmed.

"The 63-year-old Italian has agreed a three-year contract at King Power Stadium to begin his second spell of Premier League management, following a successful four years at Chelsea between 2000 and 2004." 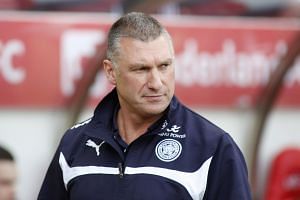 After Pearson's dismissal last month, following a breakdown in his relationship with Leicester's owners, the club had been linked with a host of high-profile replacements including Martin O'Neill and Guus Hiddink.

O'Neill was believed to be close to agreeing to return to his old club over the weekend, but issues regarding his exit from his current role as Republic of Ireland manager scuppered that deal.

Former Inter Milan and Valencia boss Ranieri then became Leicester's top target and his return to the Premier League was quickly rubber-stamped.

"I'm so glad to be here in a Club with such a great tradition as Leicester City," Ranieri said.

"I have worked at many great clubs, in many top leagues, but since I left Chelsea I have dreamt of another chance to work in the best league in the world again.

"I wish to thank the owner, his son and all the executives of the Club for the opportunity they are giving me.

"Now I've only one way for returning their trust: squeeze all my energies to getting the best results for the team." Ranieri hasn't worked in English football since 2004, when he was sacked by Chelsea, and was also dismissed from his last job as Greece manager last year.