In his introductory press conference after arriving from Porto in 2014

"I have top players and I'm sorry, we have a top manager. Please do not call me arrogant because what I say is true. I'm European champion. I'm not one out of the bottle. I think I'm a special one." - Mourinho earns himself the nickname 'The Special One'.

On an injury crisis at Stamford Bridge

"It is like having a blanket that is too small for the bed. You pull the blanket up to keep your chest warm and your feet stick out. I cannot buy a bigger blanket because the supermarket is closed. But I am content because the blanket is cashmere. It is no ordinary blanket." 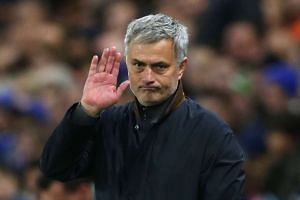 "I think he is one of these people who is a voyeur. He likes to watch other people. There are some guys who, when they are at home, have a big telescope to see what happens in other families. He speaks, speaks, speaks about Chelsea." - Mourinho later apologised, but went on to brand Wenger a "specialist in failure" in 2014.

"Omelettes, eggs. No eggs, no omelettes. And it depends on the quality of the eggs in the supermarket. They are class one, two or three and some are more expensive than others and some give you better omelettes. When the class one eggs are not available, you have a problem."

"The title race is between two horses and a little horse that needs milk and needs to learn how to jump. Maybe next season we can race." - They won the league the following season.