SINGAPORE - Make no mistake about it. After being held to a 0-0 draw by Singapore in June - in front of their home fans, no less - Japan are bent on revenge when the two national football sides meet again in a World Cup qualifier on Thursday at the National Stadium.

At the pre-match press conference on Wednesday, Japan coach Vahid Halilhodzic said the last match in Saitama brings back "bad memories", and mentioned the word "revenge" at least twice in a packed conference at the Amara Hotel.

He added: "For our players, it will be a revenge game.

"This time it will be difficult. Singapore are playing at home and will play for their people. But we have the determination and quality to fight for victory." 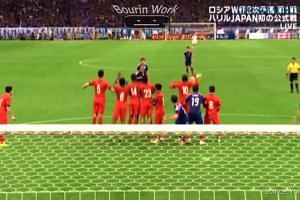 In contrast, his counterpart, Singapore coach Bernd Stange, was relaxed as he faced the media, welcoming the Japanese media and cracking jokes.

The German kept his cards close to his chest, revealing little of his game plan but he said: "We are positive and we are curious to find out tomorrow if the 0-0 draw was an accident. Our team is better prepared (compared to the last international break)."

Singapore midfielder Hariss Harun said: "It's obvious Japan are the favourites. There's more pressure on them to perform and beat us. We just have to go out there, do our job and enjoy the game."