STOKE-ON-TRENT, United Kingdom (AFP) - Louis van Gaal said that he could jump before he is pushed after his position as Manchester United manager became even more precarious following a fourth successive defeat.

The under-fire Dutchman, 64, looked like a condemned man throughout United's sorry 2-0 loss to Stoke City at the Britannia Stadium on Saturday and then in the inquest that took place afterwards.

When grilled about the firestorm of speculation surrounding his likely sacking and the possible appointment of Jose Mourinho, Van Gaal intimated that he may be about to walk away from a job that has undergone a dramatic downturn in fortunes in the past month.

While refusing to confirm or deny whether he has received assurances from the United board, he did state: "I have said already in former press conferences that it is not always that the club has to fire or sack me. Sometimes, I do it by myself.

"I am the one who wants to speak first with the board of Manchester United, with my members of staff, with my players and not always you (the media)." 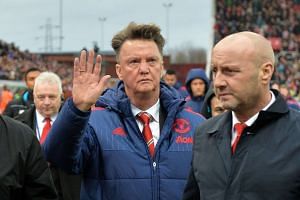 On top of that, Van Gaal failed to give a convincing answer when asked whether he would still be in charge for United's next game against Chelsea at Old Trafford on Monday.

"You will have to wait and see, but I think so," he said.

"I feel the support of everybody in the club."

United have slipped to sixth in the Premier League after three consecutive defeats - the second such sequence under Van Gaal - and were knocked out of the Champions League after a 3-2 loss at Wolfsburg earlier this month.