Now 2010 champions Spain have followed these favourites out of the World Cup revolving door after they were stunned by hosts Russia in the last 16 in front of 78,011 fans at the Luzhniki Stadium on Sunday (July 1).

They will play either Croatia or Denmark in the quarter-finals in Sochi on Saturday (July 7).

Spain have only themselves to blame for they never should have allowed this game to go into the Russian roulette of penalties. With their talents – even with Andres Iniesta and Thiago Alcantara benched – it was up to the visitors to take the initiative.

Instead, they passed and passed – 1,137 in all – but scored only when Sergey Ignashevich diverted Marco Asensio’s free kick into his own goal in the 11th minute.

Perhaps Fernando Hierro’s men thought they could reprise their 2010 triumph when they won all four knockout rounds 1-0 en route to glory. 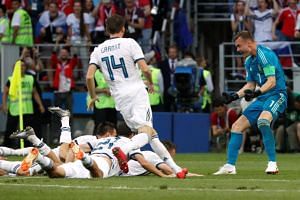 But, with a defence that has already seen David de Gea, Nacho and Sergio Ramos make silly individual errors leading to the concession of penalties and goals, there was always a chance they would slip up again.

True enough, Gerard Pique was the latest to experience a brain fade when he inexplicably raised his left arm to block Artem Dzyuba’s 38th-minute header from Alexander Samedov’s corner.

After the appeals died down and Pique was deservedly booked, Dzyuba sent de Gea the wrong way and his countrymen – who filled more than three-quarters of the stadium – wild with delirium.

Instead of waking from their slumber, La Roja continued tempting fate by reducing the game to a turgid affair of insomnia-inducing passes with no penetration.

They had no shots on target in the first half and it was not until the 85th minute when Akinfeev was called on to save an Iniesta shot from a tight angle.

The Russians never stopped running – not even 38-year-old Ignashevich and surely they exceeded their tournament average of 110km covered – and maybe Spain were banking on them to tire in the extra 30 minutes.

But the Spaniards just seem to revert to their pre-2008 frustrating selves – full of ability but no end product as they kept up a bizarre record of nine losses to World Cup and European Championship hosts since 1934.

Tick-tock, the time may be up for tiki taka.

Backed by a vociferous home crowd, Russia’s 3-5-2 that often collapsed into a impenetrable 5-4-1, never wavered, as Akinfeev stayed alert to keep out Rodrigo Moreno before his shoot-out heroics.

Fyodor Smolov, Ignashevich, Aleksandr Golovin and Denis Cheryshev were unerring from the spot as de Gea exited the tournament with just one notable save from four games.

Pre-match, the local faithful behind the shoot-out goal unfurled a tifo that read “Skazku sdelat’ bil’yu” or “make a dream happen” in Russian.

One Russian who had shouted himself hoarse during the match and looked on the brink of a breakdown, 27-year-old salesman Igor Evgenevich, said: "The players were warriors today. They were not the better players but they were the better team. Every win is a miracle and this is the mother of all miracles. This is the proudest day of my life and we must believe in the impossible!"