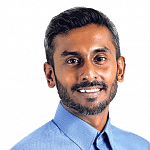 Former national coach Vincent Subramaniam has been appointed by the Football Association of Singapore (FAS) as its coaching instructor.

In a press statement on Monday (Feb 12), the FAS revealed that he will be charged with monitoring national youth coaches within the FAS' bullpen, as well as managing those coaching at various S-League clubs' Centres of Excellence and other development centres across the island.

The 63-year-old will work closely with FAS technical director Michel Sablon in realising the latter's vision of a nationally aligned youth coaching philosophy.

"Coach development is an area that the FAS has placed emphasis on and I am looking forward to being part of the team to achieve our desired vision for Singapore football," said Subramaniam, who won back-to-back S-League titles with SAFFC (now Warriors FC) in 1997 and 1998.

Sablon looked forward to what Subramaniam, who led the national team from 1998 to 2001, will bring to the table.

"With the respect that he commands given his vast experience both locally and internationally, we believe that he would be able to guide the coaches with a firm hand and assist in building the future of Singapore football," said the Belgian of Subramaniam, who is a certified Asian Football Confederation Elite coaching instructor.