The former England football captain was charged after a member of the public told police they saw the 43-year-old on the phone while at the wheel of the car.

The ex-Manchester United and Real Madrid player was said to have been witnessed driving his 2018 Bentley while using his phone on Nov 21, 2018.

Two months earlier, he was accused of "shirking his responsibility" as a role model after avoiding prosecution on a speeding charge because of a technicality.

Enlisting the services of celebrity lawyer Nick Freeman, who is dubbed "Mr Loophole", Beckham accepted that he drove at 59mph (95kmh) in a 40mph zone in west London in January last year.

But he did not face further action because a notice of intended prosecution (NIP) was not received until one day after the statutory 14-day time limit.

This prompted Joshua Harris, director of campaigns for road safety charity Brake, to say it was "hugely disappointing" to see the role model "shirking his responsibility and getting off a speeding prosecution on a mere technicality".

Beckham was sent another NIP over the latest incident and was subsequently charged on Feb 5, according to court staff.

Using a hand-held mobile phone while driving in Britain is illegal. 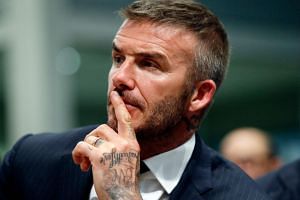 The matter is listed to be heard at the court in Bromley, in the south-eastern London suburbs, on Tuesday, but Beckham is not expected to attend and members of the press and public will not be admitted.

The hearing will be an administrative one where a single magistrate may choose to impose demerit points or a fine.

Freeman also assisted Beckham in overturning an eight-month driving ban in 1999 after arguing that the footballer was trying to escape a paparazzi photographer.