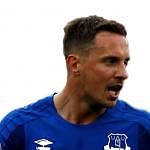 After signing off with a precious away victory against Stoke before the international break, we face another major test of our mettle on Saturday (March 31) when Pep Guardiola's Manchester City head to Goodison Park.

City have swept all before them this season and deserve to be out in front in the Premier League. However, we are determined to give them a tough game at Goodison, which continues to be a fortress for us.

In our past 10 home games, we have amassed 23 points and, since Sam Allardyce took charge of the team in December, we have conceded just six goals in eight games at Goodison, winning five, drawing two and scoring 13 goals.

In fact, our points tally home and away since the beginning of December is the sixth best in the league, five points better than Arsenal over the same period and only two off Chelsea.

Given where we were when Sam took over, we had to get back to basics and ensure we stayed away from the wrong end of the table because there was a point earlier in the season when people were starting to get edgy.

Now that we have reached the 40-point mark, we want to kick on and finish the season as strongly as possible - hopefully starting against City - so we can carry some positive momentum going into the next campaign.

We are one of the few teams to have taken a point off City in the league this season, Wayne Rooney's instinctive finish earning us a creditable 1-1 draw at the Etihad in August. In fact, looking back at that game, we were a little unlucky not to take all three points on the night.

We also beat City 4-0 when they last visited Goodison in January last year. If you were to ask our fans, I'm sure most would say that was one of their favourite games of the past couple of seasons. That match was particularly memorable for the great goal scored by Tom Davies. It was fantastic for a local lad to score his first goal on such an occasion and Tom went on to pick up a lot of awards for his performance that afternoon.

Looking back, that was one of those days when everything seemed to go right for us. We managed to grab the first goal, which set things up perfectly, then two of our young players, Tom and Ademola Lookman, came into their own, grabbing their first senior goals for the club to seal what was a resounding victory.

We will need to show similar character and resolve this weekend if we are to extend our unbeaten run against Pep's City to four matches.

Before the international break, our hero in the back-to-back victories against Stoke and Brighton was January signing Cenk Tosun.

Cenk initially had to bide his time after joining the club from Besiktas but he has since shown exactly why the manager brought him in, scoring four goals in his last three games.

Like most strikers, he is a confident lad and his energy around the dressing room rubs off on others.

If people like Theo Walcott, Yannick Bolasie and Seamus Coleman continue to put the ball into the box, then Cenk will score goals because he comes alive inside the 18-yard box, especially in the air.

Let's hope he continues his recent hot streak as we look to finish the season with a flourish.