SINGAPORE - When the 2018 International Champions Cup (ICC) squads for the Singapore leg were announced, schoolboy Amali Nooresham was crestfallen that flying winger Angel di Maria was not included in Paris Saint-Germain's travelling party.

His disappointment turned into delight on Monday (July 30) as the Argentine star, who arrived in Singapore on Sunday, was included in the starting line-up by coach Thomas Tuchel and played the entire first half in PSG's 3-2 win over Atletico Madrid, watched by 22,007 fans at the National Stadium.

Amali, a Manchester United fan, was delighted to see the former Red Devil di Maria in action when he least expected to.

"When the announcer read out the line-ups before the game, my mind just went blank when I heard his (di Maria's) name," said the 15-year-old, who missed the international friendly between Argentina and Singapore last June when di Maria scored a cheeky back-heeled goal in the 6-0 win.

"I know he arrived in Singapore, but I did not expect him to play at all. So this was a pleasant surprise and it makes the 2018 ICC very memorable for me now."

The five-goal thriller on Monday was a fitting finale to the Singapore leg of the 2018 ICC which also featured English Premier League giants Arsenal. The three matches drew a total attendance of 95,410.

It was not only the action on the pitch that kept the fans entertained. 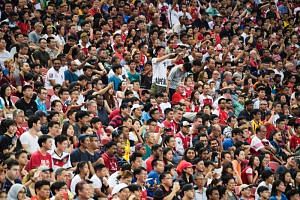 Die-hard supporters also staked out at the various hotels where the teams were based - Shangri-La Hotel (Arsenal), JW Marriott Singapore South Beach (PSG) and Mandarin Oriental (Atletico) - getting selfies and autographs from the obliging superstars.

Fringe events like Arsenal's launch of their third kit at the Esplanade and their tour of Haji Lane also attracted big crowds. Amali was one of those fortunate enough to get autographs from a few Arsenal players.

Ashraf Ali, an SMRT station manager, said that he was happy to see non-EPL teams like PSG and Atletico in Singapore.

"They are not teams that you can watch regularly here and we must be considered lucky to have them in Singapore," said the 34-year-old.

"Of course the big names didn't come, but this year is an exception because of the World Cup. Players like di Maria and (Marco) Verratti were good enough for me."

But others like full-time father James Vaz lamented the absence of World Cup stars like PSG duo Neymar and Kylian Mbappe and Atletico's Antoine Griezmann.

Singapore will host one leg of the prestigious pre-season tournament for another two years until 2020 and fans are already looking forward to next year's edition.

Liverpool fan Vincent Tan, who watched last night's game with his friends, hopes to see the likes of Mohamed Salah and Sadio Mane zip down the flanks of the National Stadium next year.

"Ultimately, most Singaporeans love the English game and, if they get to see a team like Liverpool or Manchester United, I think you can easily see a sell-out stadium," said the 37-year-old shipping executive.