About 1,000 pupils from Yumin and neighbouring Chongzheng Primary School packed the Yumin school hall and screamed at the top of their voices, bellowing: "Ronaldo! Ronaldo!"

It is understood that Yumin was selected for Cristiano Ronaldo's visit as an homage to his humble beginnings, when he was born in Madeira to a part-time kit man and a cook, and had to share a room with three older siblings.

And like most of his illustrious career, Ronaldo did not fail to deliver after arriving at 12.50pm dressed simply in an all-white combination of T-shirt, bermudas and shoes.

Unlike the gawky teenager who knew limited English when he first made an impression on the world stage by signing with Manchester United in 2003 as the most expensive teenager in English football history then, the 34-year-old was cool and charming, and fielded questions from six pupils in fluent English.

And unlike the Portuguese Peacock who pranced and preened on the pitch almost narcissistically, Ronaldo was approachable and affable as he freely gave out hugs and high-fives to the children.

He said: "I started my football journey when I was 11, 12 years old. The most difficult part was to leave my family and try to be a professional football player.

"I was from a humble family but my family always gave me the opportunities. My mum and dad said if you want that chance, go and try. So, I went to Lisbon and tried. I played for Sporting, my first club. I tried my luck and I got it.

"It was very difficult, I cried sometimes, it was tough. After a few years, everything changed. I was 16 when I got my first professional contract.

Ibrahim Zaki, a Primary 6 pupil from Yumin, was awestruck and inspired by Ronaldo's advice.

He said: "At first, I did not believe he was coming because there are some Singaporeans who don't even know us. I thought he would visit a school that was good in football, and not an average one like us.

"I am very happy to see him in person. This is a very special moment to me. I admire him a lot because he is 34 and he trains more than the others to be so fit. I play football a lot as a goalkeeper and I hope to be able to save one of his shots one day."

The five-time Ballon d'Or winner was clearly in a good mood as he demonstrated some tricks with the football and shared openly about how he is currently confused about whether to add to his four children to reach his previous target of seven kids.

He also displayed his cheeky side when he left the hall at 1.20pm by videobombing Yumin teacher Amalina Batcha Sahib and shaking her shoulders from behind.

The 34-year-old Manchester United fan said: "I just wanted to take a video with Ronaldo in the background and I didn't expect him to join in. It was a really exciting moment.

"I hope our students are motivated by Ronaldo because he showed that you can achieve great things with hard work, regardless of what background you come from."

This is not the first time Ronaldo has swept fans off their feet in Singapore.

Exactly six years ago, he was also the marquee guest for the Singapore Olympic Foundation-Peter Lim Scholarship initiative. Then, he also showed his heart for the heartland by visiting Crest Secondary School in Jurong East. 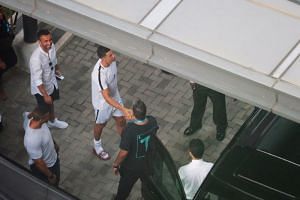 In 2017, he made a pit stop here to visit Lim's daughter Kim, who had given birth to a boy.

For this trip, Ronaldo landed in Singapore on Tuesday and will leave on Friday.

Those who missed out on a glimpse of the superstar can take heart, as sources tell The Straits Times Ronaldo is set to play at the National Stadium for the first time when Juventus take on Tottenham Hotspur at the ICC on July 21, a day after his former club Manchester United's clash with Inter Milan.