SHANGHAI (AFP) - China could soon be able to field a national team made up almost entirely of players born elsewhere after authorities said nine foreign footballers were switching allegiance.

On Wednesday (Aug 21), Brazil-born striker Elkeson became the first player without Chinese heritage to be named in the national squad, as China attempt to reach the World Cup for a second time.

The 30-year-old is poised to make his debut next month in a 2022 World Cup qualifier in the Maldives, where London-born Nico Yennaris - who is half-Chinese - will likely win a third cap.

"We want to go to Qatar (2022 World Cup)," Chen Xuyuan, new president of the Chinese Football Association (CFA), was quoted as saying by state media.

"Naturalised players can be helpful in order to achieve the national team's short-term goals.

"Up to now, clubs have registered nine naturalised players with or without Chinese heritage at the CFA in total, some of them are still going through the naturalisation process."

Chen, named to the top post in Chinese football on Thursday, said that more naturalised players will likely represent China as qualification for 2022 progresses.

"But it will never be a long-term policy of the CFA and the numbers will be very limited," Xinhua news agency quoted him as saying. 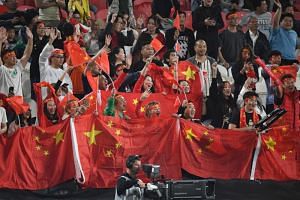 Several Brazilian attacking players from the Chinese Super League are reportedly among those being naturalised, as is English-born defender Tyias Browning.

The move to give passports to players born elsewhere - particularly when they have no Chinese ancestry - has divided fans.

Some say the CFA should do everything it can to help Marcello Lippi's side reach only China's second World Cup.

Others say that a country of 1.4 billion people should easily be able to find 11 players good enough.

China have reached football's biggest stage only once, in 2002, but left without a point or scoring a goal.

President Xi Jinping wants China to become a major force in world football by 2050, but Lippi's side languish 71st in the current Fifa rankings.

"Hosting the World Cup is a dream of all Chinese fans, including me," said Chen, declining to say when the country will make its move.

"The CFA will analyse and find out when is the best timing to bid," he added.