SHANGHAI (AFP) - Fabio Cannavaro's short reign as China football coach could already be over after the hosts were beaten for the second time in five days on Monday (March 25) and again failed to score.

The Italian World Cup winner in 2006 was put in charge 10 days ago, but the local media had speculated that the China Cup amounted to an audition to be fellow Italian Marcello Lippi's long-term successor.

If that was the case, the 45-year-old legendary defender fluffed his lines.

The home side followed up last Thursday's 1-0 loss to Thailand with another disjointed display in the four-team tournament, going down 1-0 to lower-ranked Uzbekistan in the third place play-off.

In front of a sparse crowd for the mid-afternoon match in Nanning, China failed to muster a shot on target and there was a smattering of jeers at the final whistle.

Former Juventus and Real Madrid star Cannavaro, who is also coach at Guangzhou Evergrande, said afterwards that he would hold talks with the Chinese Football Association (CFA) and the Chinese Super League (CSL) club.

"But until now the CFA hasn't made any clear statement about the appointment," he said.

"I have said before: taking over the national football team can be a very big challenge. The bigger the challenge, the greater the passion will be. 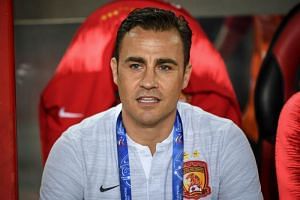 Football: 'Public uproar' as critics round on Fabio Cannavaro over China role

"As the national team is experiencing changes, we all have some concerns about the pace and degree of the changes.

"If (China) needs me, I will consider it, but who can be the coach of the national team cannot be decided in one day."

Juggling a top CSL job and the national side "is difficult", Cannavaro admitted, after another meek defeat that left China - who have grand ambitions to host a World Cup and become a major footballing force - bottom of the four sides in the China Cup.

"We still need to calm down and discuss it. If we cannot find a suitable way to cooperate, I will still coach Evergrande (only)."

Cannavaro made five changes to the side lucky to lose by just one goal to Thailand, but it only made the team - missing the rested Espanyol forward Wu Lei - less effective.

They were already on the back foot when forward Eldor Shomurodov took advantage of hesitant defending by Evergrande's Zhang Linpeng on 35 minutes to lash the ball into the roof of the net for Uzbekistan, who are 89th in the Fifa rankings to China's 72nd.

Uzbekistan, soundly defeated 3-0 by Uruguay on Friday, were also the better team in the second half and should have extended their lead, but China-based substitute Odil Ahmedov headed straight at goalkeeper Yan Junling.

In the final, stand-in forward Cristhian Stuani scored his third goal in two games as Uruguay taught Thailand a footballing lesson to win the China Cup with a 4-0 victory.

The 2018 World Cup quarter-finalists hardly missed the injured star-striking duo of Luis Suarez and Edinson Cavani as they made it seven goals in two games.