SINGAPORE - A half-empty stadium of 20,621 fans watched the friendly between Brazil and Senegal last night at the National Stadium, well off the sold-out crowd of 51,577 that turned out for the five-time world champions' clash with Japan in 2014.

While the occasionally boisterous crowd cheered on Neymar and Co. in the 1-1 draw, as well as the two young pitch invaders before the start of the second half, there were swathes of empty seats and sections in the 55,000-seater National Stadium, with the two upper decks left unoccupied.

Fans who The Straits Times spoke to said they were surprised by the lacklustre turnout for the first clash between the two countries, which featured stars such as Neymar, Roberto Firmino, Philippe Coutinho and Sadio Mane.

Sam Barthi, who was at the stadium with a group of friends, attributed this to the match being held on a weekday.

The 36-year-old Brazil fan said he is still considering whether to buy tickets to the Sunday game between Brazil and Nigeria, adding that he had bought yesterday's ticket at a discount.

He said: "I thought I would see more people... It's a working day and a friendly match, so maybe the crowd will be better on Sunday. Cost could be an issue, but I bought mine at $53.50 as I saw it was 50 per cent off yesterday."

In comparison, the International Champions Cup in July - which featured English Premier League clubs Manchester United and Tottenham, Juventus and Inter Milan - cost fans between $38 (single match tickets) and $418. The Brazil Global Tour will also see the Selecao taking on Nigeria on Sunday.

Diehard Brazil fan Shashi Krishnan, 42, said it was "really expensive" spending over $300 for both matches. He bought a single ticket for yesterday, and five - for himself, his wife and three children - for Sunday to "save on costs". 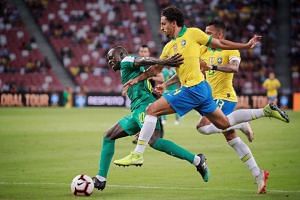 Football: Brazil held 1-1 by Senegal in front of poor crowd at National Stadium

Football: Singapore is a 'lucky' hunting ground for Neymar

"I didn't manage to catch them last time they came because I was in Hong Kong for work," he said.

"I'm very surprised at this turnout but maybe everyone is at work. But I also feel that Singapore has lost its sports soul and there is no sports culture here."

Decked out in a Brazil jersey and green-and-gold hat, Brazilian Andrea Fuchsloch, 36, attended the game with a group of 20 adults and children.

"Back in Brazil the stadium will definitely be full when they play because we are a soccer nation. But we have a lot of Brazilian fans here so we're having fun," she said.

Brazil legend Juninho Paulista, head of technical development at the Brazilian Football Confederation and national team coordinator, said: "Yes, it is disappointing because we always want to play in front of many fans. We have good teams here and we hope there will be more fans coming for Sunday."

Despite the poor turnout, Senegalese defender Kalidou Koulibaly was not fazed by the lack of supporters. He said: "Fans support many different teams and it is okay. We were concentrating on the game and not thinking about how many people there were in the crowd.

"We are happy to be here to discover your nice city."

TEG Live, which organised the Brazil Global Tour, was unable to respond by press time.