SINGAPORE - Five-time world champions Brazil fielded a much stronger team than their last visit to the Republic, but produced a less sterling performance than five years ago, as the world No. 3 were held 1-1 by world no. 20 Senegal at the National Stadium on Thursday (Oct 10).

Golden boy Neymar collected his 100th cap for the Selecao, and took only two minutes to complain of an innocuous knock. The flashy backheels, chops, and sombreros followed, but the elusive goal didn't come.

This was largely the script that played out in a strangely muted atmosphere at the Sports Hub, compared to the last time Brazil played here, when Neymar scored all the goals in a 4-0 win over Japan in front of a 51,577-strong crowd at the same venue.

Even as the second and third tiers of the arena were completely empty - the official attendance was 20,621 - the sound system was not as bright as usual, as the national anthems and half-time fan interviews were barely audible.

Tite tried his best to lift spirits when he sent out his strongest first XI, identical to the one that drew 2-2 with Colombia in the United States last month.

Only Neymar remained from the 2014 starting line-up as he linked with fellow fan favourites Roberto Firmino and Gabriel Jesus up front in a 4-3-3 formation, with Casemiro, Arthur Melo and Philippe Coutinho making it a star-studded midfield.

It took them just nine minutes to make a breakthrough when Jesus set Firmino free from the right, and the Liverpool forward clinically dinked past Alfred Gomis for the lead.

But the avalanche of goals failed to materialise as Senegal displayed good tactical awareness and positioning to supplement their physical advantage and negate the South Amercians' fluid passing and movement. 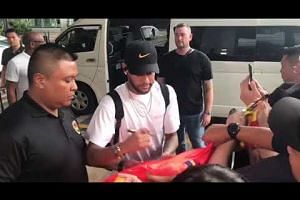 Current crop 'must win World Cup to be legends'

Football: Senegal are a match for Brazil, insists coach Cisse

After a minute-long water break in the 27th minute, the Africans' tenacity and patience paid off when their main man Sadio Mane charged into the box between two defenders and was bundled over by Marquinhos as referee Muhammad Taqi pointed to the spot in the 45th minute.

Despite pleas for Mane to take the spot-kick, it was Famara Diedhiou who calmly slotted into Ederson's bottom right corner for the equaliser.

There was still time for Neymar to squander a one-on-one opportunity when he shot straight at Gomis after being put through by Firmino before both sides went into the break on level terms.

For all his showboating, Neymar was arguably most productive when he allowed two young pitch invaders to take a wefie with him. The 27-year-old looked on in disbelief when his 69th-minute free-kick was whipped just over.

With Tite and his opposite number Aliou Cisse frantically pacing their respective technical areas and gesticulating throughout the match, and both sets of players remonstrating with Taqi over his decisions, one got the sense that both teams took this friendly seriously, as Neymar and Mane stayed on the pitch for the full match.

Mane almost broke the deadlock when his angled shot cannoned off the post in the 85th minute, while Neymar burst down the other end two minutes later only to see his effort blocked by Salif Sane.

Neymar then had a 90th-minute free-kick well held by Gomis as Senegal held firm for a draw that should please only the underdogs with ambitions of breaking the established world order.