SINGAPORE - The Football Association of Singapore on Tuesday (July 17) night weighed in on the issue of teenage footballer Ben Davis' deferment for National Service (NS) and said it strongly supported his request.

In a statement released at 11.05pm, the FAS said it "believes that this is one such case which merits serious consideration even within Mindef's current framework.

"We wish for a balanced approach to be taken, to promote and enhance burgeoning talent without at the same time compromising the integrity of the national service agenda.

"This will be the first time a Singaporean has been offered a professional contract by a club from one of the top six leagues in the world. It is a reflection not only of the fact that Singaporean footballers have the potential to rise to the top of the profession, but also a recognition of the local coaching and development framework which Ben has come through."

The 17-year-old Davis had signed a two-year professional contract with English Premier League (EPL) club Fulham on June 29. Mindef had informed Davis' family on June 11 that his deferment request was denied.

Only three athletes - Joseph Schooling, Quah Zheng Wen and Maximilian Soh - have met the deferment criteria in the past 15 years.

Davis is the first Singaporean to sign a professional contract with an EPL club.

The FAS noted that it "understands the concerns around exceptions but believes that a balance can be struck between player development and national service obligations in this unique case. 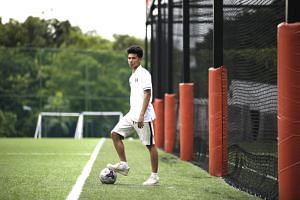 "We also believe that any deferment cannot be open-ended, and that any deferment has to be matched with an assurance to see through Benjamin's national service obligations and a commitment to use this opportunity to enhance the development of national football.

"We will work with Benjamin and his family on the above, with a view to seeking to persuade Mindef of the merits of the application and to assuage Mindef's concerns over Benjamin's national service commitments, and to find a balanced solution to the issue which best serves our nation's interests."

Ben, whose father is English and mother is Thai, was born in Thailand and moved here with his family when he was five.

He became a Singapore citizen in 2009, and according to rules of world football governing body Fifa, he will be eligible to play for both England and Thailand due to his parents' heritage.

He has represented Singapore at various national youth squads, most recently in the Under-19 team, and was called up to the senior national team earlier this year, but did not play.

Ben studied at the Singapore Sports School from 2013 to 2015 and moved to Harrow High School in London in 2016. In July last year, Fulham signed him on a two-year scholarship.

The FAS also noted that it "wholly agrees that National Service is of vital importance to our nation, and we cannot accept any less.

"The obligation to serve is universal, and we understand Mindef's position that requests for deferment from service should be the rare exception for sportsmen rather than the norm."