SINGAPORE - Football fever has hit Singapore's shores with the arrival of the first team for this year's International Champions Cup - English giants Arsenal.

The Gunners arrived in the Republic early Monday morning (July 23) and have checked in at the Shangri-La Hotel along Orange Grove Road.

Despite their long flight from London, they were still happy to oblige requests for autographs and wefies from a small group of devoted fans that had gathered outside the hotel.

The Gunners have announced a 25-man squad for their pre-season tour. Mesut Ozil, Mohamed Elneny and Alex Iwobi have returned from World Cup duty to join their team-mates, while three of Arsenal's five new signings - goalkeeper Bernd Leno, defender Sokratis Papastathopoulos and midfielder Matteo Guendouzi - are also in the travelling squad.

Swiss defender Stephan Lichtsteiner and Uruguay midfielder Lucas Torreira are absent. The duo are expected to have been given extended breaks after their national teams reached the knockout stages of the World Cup in Russia.

Petr Cech is also in the squad, despite talk of Roma possibly making a move for him following Alisson Becker's departure for Liverpool and new Gunners manager Unai Emery bringing on board Leno. 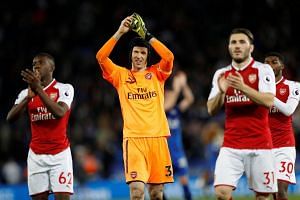 Besides the uncertainty over Cech, Ozil also made the headlines overnight following his sensational exit from the German national team. In a strongly-worded statement on social media, the player, arguably the most gifted player of his generation in Germany, said he would not longer play for Die Mannschaft because of racism and disrespect over his Turkish roots.

Ozil and team-mate Ilkay Gundogan, had been heavily criticised just before the World Cup when they took a photo with controversial Turkish President Tayyip Erdogan. Following Germany's early exit from Russia, Ozil was made one of the scapegoats for their failure to retain the trophy.

Ozil said that in the eyes of his critics, including German Football Association (DFB) president Reinhard Grindel, "I am German when we win, but I am an immigrant when we lose".

Arsenal play Spanish LaLiga side Atletico Madrid at the National Stadium on July 26 and take on French giants Paris Saint-Germain two days later. Both matches kick off at 7.30pm.

Tickets to the 2018 International Champions Cup in Singapore are still available at www.sportshub.com.sg/ICC2018.