CARDIFF, Wales (REUTERS) - Sergio Aguero marked his 300th appearance for Manchester City with a familiar landmark goal to set the resurgent Premier League champions on their way to a magnificent 5-0 win at Cardiff City on Saturday (Sept 22).

Aguero helped City rebound in emphatic fashion after their worst performance of the season in the home Champions League defeat by Lyon. A typical sharp, close-range finish from Bernardo Silva’s pass saw him notch his 205th goal for the club.

City, then able to stroll as they extended their unbeaten league run to 12 matches, celebrated further when record signing Riyad Mahrez joined the party with two superb second-half goals, his first for the club.

The superb win left City still hot on the trail of Liverpool, who lead the league on a maximum 18 points, with the key goal from Aguero underlining just why City are so thrilled he has just signed a one-year contract extension.

The Argentine striker had said in March that he might leave City in 2020 because he wanted to end his career at former club Independiente but his new deal will keep City’s all-time leading goalscorer at the club until he is 33.

The breakthrough goals for Mahrez, their 60 million pound ($78.45 million) summer buy from Leicester City, were also a particular boon as City moved on to 16 points. 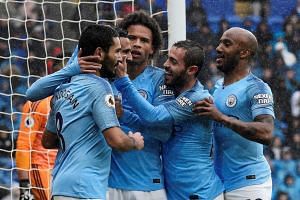 The Algerian has had to be patient to break his duck but reckoned he always knew it was coming shortly.

“It took a while to arrive but I knew it would come. I will try to help the team as much as I can,” he told Premier League TV.

“I didn’t know I’d now scored 50 goals in English football and I’m very happy to score my first goal for the team.”

City were particularly keen to make up for their shock 2-1 loss to Lyon at the Etihad Stadium and almost tried too hard to make amends in the opening half-hour until, typically, it was Aguero who calmed them with a fine opener.

“We know it was difficult to play after the Champions League game but the manager told us to be ready for this game because it’s never easy, especially away at Cardiff,” said Mahrez.