Frustrated for long periods in the match, Ireland showed the desire and determination demanded of them by assistant manager Roy Keane as they scored a late winner and booked their place in the knockout round.

They will face France on Sunday, in what promises to be a blockbuster tie, given the history between both sides. Retired French striker Thierry Henry had infamously used his hand as part of the build-up that led to Les Bleus' winning goal against Ireland in a tense 2010 World Cup qualifier playoff game.

The goalscoring hero of the night was Robbie Brady, whose diving header five minutes from the final whistle secured a memorable victory for the Irish, who also famously defeated the same opponents by the same scoreline at the 1994 World Cup.

That it came against a second string Italian side - manager Antonio Conte made nine changes with Monday's clash against Spain in mind - mattered little to Ireland.

They finished third in Group E with four points, behind group winners Italy and Belgium and ahead of bottom-placed Sweden, who were fighting for the remaining last 16 spot which had been occupied by Turkey. 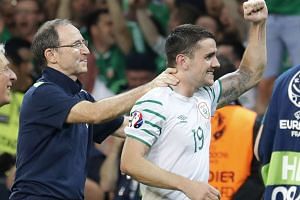 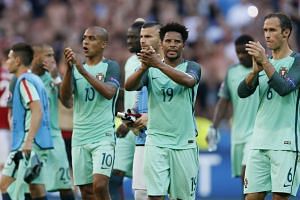 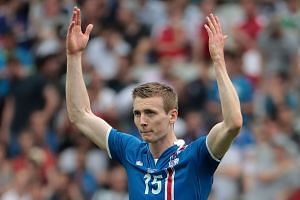 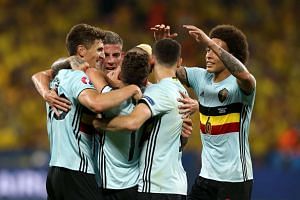 Despite ceding majority of the possession to Ireland, Italy were rarely troubled and limited their opponents to long-range shots and comfortably dealt with the numerous crosses sent into goalkeeper Salvatore Sirigu's penalty area.

Ireland had the better chances in a lively first half. Winger Jeff Hendrick's powerful attempt narrowing missing the goal while Daryl Murphy also coming close with a stern header.

But clear-cut opportunities were few and Italy needed 43 minutes before mustering their first shot.

Striker Simone Zaza's spectacular volley after the break - it went inches over the crossbar - and substitute Lorenzo Insigne's shot that hit the post were warnings for Ireland.

They paid little heed and dug deep, as substitute Wes Hoolahan delivered an inviting cross which was met by Brady and gave Sirigu no chance.

It sparked wild celebrations from the Irish supporters, who never stopping singing at Lille's Stade Pierre-Mauroy, as well as on the Ireland bench.

Even the normally-stoic Keane could not stop smiling. It was one of those footballing nights for the Irish.

- Ireland start positively and create the first significant chance in the 10th min when winger Jeff Hendrick uses his strength to hold off a tackle before unleashing a powerful shot that shaves the post.

- An Irish corner in the 20th min sees Daryl Murphy get up well for a clean header which Salvatore Sirigu tips over the crossbar. The next corner comes to nothing.

- Ciro Immobile takes Italy's first shot of the match in the 43rd min but just misses the upright.

- Sixty seconds later, James McClean is bundled over inside the Italy box by Federico Bernardeschi but the referee waves away Irish protests.

- Simone Zaza almost produces a moment of magic to light up this dull game in the 53rd min but his sweetly-struck volley after a cross from the left narrowly misses the target.

- Substitute Insigne's curling effort in the 77th min beats Darren Randolph but not the upright.

- Another sub, Ireland's Wes Hoolahan, is clean through on goal in the 84th min but weakly shoots straight at Sirigu.

- Hoolahan makes amends for that horror miss though. A minute later, he receives the ball on the right and whips in a delicious cross that is met by the head of Robbie Brady to give Ireland the lead.

Ireland joined England, Wales and Northern Ireland in the next round, a perfect sweep for the home nations. All four are managed by a local, a triumph for British coaches. Michel Platini's decision to expand the Euros to 24 teams has received plenty of criticism but there will be no complaints from anyone in the United Kingdom or Ireland. Except maybe the Scots.

Not only did Brady score the decisive goal, he was a threat throughout the game with his delivery from the left flank and rampaging runs. He started Ireland's first match at left back, was deployed on the left wing tonight and finished as an attacking midfielder when he scored the crucial goal. An amazing effort from the 24-year-old

Having already confirmed themselves as Group E winners even before this game, this game mattered little to the Azzurri. Conte will recall his starters, who will have had 10 days rest and prepare, four more than the Spanish. Ireland meanwhile, will have four days to get ready for tournament favourites France.

Both teams committed a combined 40 fouls, the most of any game at Euro 2016 so far.

Robbie Brady: "What a moment for everyone involved, we said we were going to do a job and we did it. Into the last 16, we go again.

"My legs took me into the box for the goal and I am over the moon. I am emotional. I grew up waiting to play at this stage, to do it in front of my family is great."

James McClean: "The passion, grown men crying and complete love for our country, it is quite remarkable. We knew it would be win or bust, we left nothing on the field, the best night of my life hands down."

Antonio Conte: "It was a tough contest, very physical on a barely playable pitch. If I am honest I was looking for a performance by my young players and I saw that because they scrapped. Today's match was very, very tough. We responded blow for blow. The pitch did punish us a bit more than them.

"Defeat doesn't mean anything but it has come on the back of two wins. We shouldn't let them get away with a loss. That said I saw some good responses from my players, these are tough games for everyone."