DORTMUND (AFP, REUTERS) - The setting may be unfamiliar with the German Bundesliga returning behind closed doors after a two-month coronavirus shutdown. But the identity of the day's first goalscorer was entirely familiar, as Erling Braut Haaland put Borussia Dortmund ahead against Schalke on Saturday (May 16).

The hosts went on to win 4-0 with Raphael Guerreiro scoring a brace alongside a Thorgan Hazard strike. But it was Haaland who grabbed the headlines.

The teenager diverted a low Hazard cross into the far corner of the net in the 29th minute for the first goal of the five matches kicking off on Saturday afternoon on the long-awaited comeback of top-flight football in Europe.

It was a 10th goal in nine Bundesliga appearances for the prolific 19-year-old Norwegian striker, who moved to Dortmund from Red Bull Salzburg in the winter.

Back with a bang!

Usually the scorer of the first goal in the Ruhr derby - one of the biggest fixtures in German football - could expect to be mobbed by his teammates.

On this occasion, though, Haaland's colleagues respected social distancing recommendations and avoided getting too close as they applauded the smiling and dancing goalscorer. 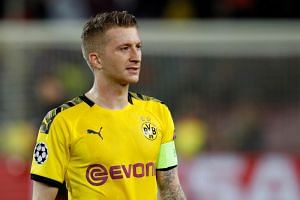 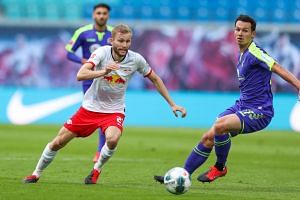 Haaland also had a hand in the second goal, forcing Schalke goalkeeper Markus Schubert into a poor clearance which led to Guerreiro making it 2-0 just before half-time.

Dortmund’s win leaves them just a point behind leaders Bayern Munich, who play on Sunday at Union Berlin.

The hosts celebrated a first league win over Schalke since November 2015, while the visitors stretched their winless league run to eight games, having scored only twice in the process.

In another game, the Bundesliga’s bottom side Paderborn rode their luck as they came away with a potentially vital point in a 0-0 draw at fellow strugglers Fortuna Dusseldorf.

Paderborn had lost four in a row before the suspension in March but a point on their return to action will boost their hopes of survival.

They moved on to 17 points, one behind Werder Bremen, while Fortuna stay third from bottom with 23 as they were left to rue some poor fortune on a sunny afternoon at the Dusseldorf Arena.

Fortuna’s Valon Berisha twice struck the woodwork as he continued his search for a first goal for his new club since moving on loan from Lazio in January. Teammate Steven Skrzybski was also unfortunate to see his strike cannon back off the post in the last 10 minutes.

Paderborn might well have snatched an unlikely win three minutes from time but Nigerian international Jamilu Collins squandered a good chance from close range to secure what would have been an unlikely triumph.

Wolfsburg, meanwhile, stretched their unbeaten league run to seven games with a away 2-1 win inside an empty Augsburg Arena.

The visitors took the lead two minutes before half-time when Renato Steffen used the pace of a cross to head home from 15 metres out, giving a diving Andreas Luthe no chance to make a save.

Hosts Augsburg equalised from a second-half set piece when John Brooks’ headed clearance went the wrong way, came off goalkeeper Koen Casteels’ hands and hit the bar before bouncing on the line where Tin Jedvaj was on hand to head it home.

However, Wolfsburg capitalised in stoppage time when Kevin Mbabu’s low cross found substitute Daniel Ginczek inside the six-yard box and his poacher’s finish gave the visitors all three points to move them up to 39 points and provisional sixth spot.