Over the past week, 13 cerebral palsy footballers have brought more joy for Singapore football than their able-bodied counterparts have over the past year. It may seem like a sweeping statement to some, but I see it as hope for sweeping change across the ailing local game.

Here, you won't find an unapologetic national player who gets sent off on home soil.

You won't witness a coach questioning the expectations of fans and journalists even as the poor performances pile up.

Unlike the hurt and haplessness surrounding the able-bodied Lions, Singapore's cerebral palsy (CP) outfit have showed heart and hope to clinch a bronze at the 2015 Asean Para Games.

Look at Jeremiah Tan, an FT6-rated player who has coordination and balance problems in all four limbs and trunk.

He stands at 1.54m but is a giant out on the field, earning some of the loudest cheers for chasing down every loose ball as if it was a World Cup final.

You know, every match feels like that to this team.

Coach Mohamed Zainudeen said 20-year-old Tan is so appreciative of every minute out on the pitch, he can typically be found in joyous tears after a game. 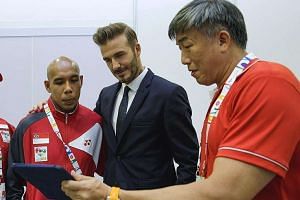 Look at captain Khairul Anwar (if you haven't already). With five stunning goals from long-range, he has attracted thousands of social media shares (and Facebook friend requests, he tells me).

Yet, Khairul always deflects attention to Zainudeen and his team. Mention "great goal" to the Republic Polytechnic student, and he says "even better pass from my team-mate".

Ask him how his unerring howitzers always seem to find the net in a smaller goal, and he tells you "coach Zai has worked with me on this for many months".

Before the APG, Zainudeen found it hard to source for sponsors for his team, or even find players. With a total talent pool of just 13, anyone with cerebral palsy could have walked into the squad to form the final 14 at the Dec 3-9 showpiece.

Countries like Myanmar and Thailand have over 50 players to select from.

To make his squad feel special, Zainudeen had asked the Football Association of Singapore (FAS) for help to provide the Nike kits worn by its respective national teams. He said a senior official told him there was "no stock".

FAS said it "happily supplied" scarves and training kits, but declined to explain why the squad had to get their game jerseys from Dreamatron, a local brand that should be commended for stepping up when others had perhaps let the team down. 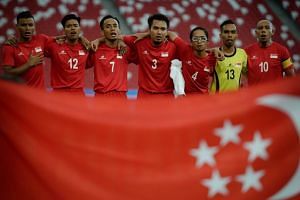 Judging by the turnout of over 3,000 fans at Wednesday's bronze medal clash against Malaysia, the CP team should no longer have issues raising funds for overseas training trips - crucial, as it is almost impossible to find similar opponents in Singapore.

Unlike their able-bodied counterparts, the CP footballers will probably never fill the National Stadium. It is unlikely, despite their APG exploits, that they will inspire a future generation to wear the national jersey.

But they have shown themselves to be more adept in connecting with fans through their humility and genuine love for the game. No matter a crowd of 500 or 2,500, they are always committed, always earnest, always grateful that they are flying the Singapore flag.

It may seem like basic traits - work hard, give 100 per cent, stay humble and remember that you are playing for the nation. But these characteristics are what the country will remember best about the 'CP Lions'.

At a time when the elite aspect of Singapore football is struggling - the domestic game is in tatters and mired in uncertainty, with the performances of the national team uninspiring and stagnant - it is a timely reminder that in finding a way forward, never underestimate the value of simple, basic traits.