BARCELONA (REUTERS) – Barcelona captain Andres Iniesta is fit to face Chelsea in their Champions League last-16 second leg at the Nou Camp on Wednesday (March 14) after recovering from a hamstring injury, with visiting coach Antonio Conte calling the midfielder “a genius”.

Iniesta famously got the added-time equaliser at Stamford Bridge in a 2009 semi-final, second leg before Barca went on to win the trophy but he was in danger of missing the latest clash after being injured against Atletico Madrid on March 4.

“I like to compare him with (former Italy midfielder) Andrea Pirlo. We are talking about a genius, a genius with a football,” Conte told a news conference on Tuesday.

“I don’t know if tomorrow he could play (or not), but I think, in this type of game, it’s right to face the best players and not hope that they could miss out through injury.”

The English champions played better than the runaway La Liga leaders in last month’s first leg but were left cursing a careless pass by Andreas Christensen that allowed Lionel Messi to cancel out Willian’s opener in a 1-1 draw.

“We played a really good game and almost a perfect game. Also because when you play against Barcelona, who I consider one of the best in the world, if you want to have any hope to win the game you have to play a perfect game,” Conte said.

“We made one mistake and paid a lot for it. The final result of the first leg gave a great advantage to Barcelona but we know very well the philosophy of Barcelona, they will want to play their football tomorrow, to score and to win the game." 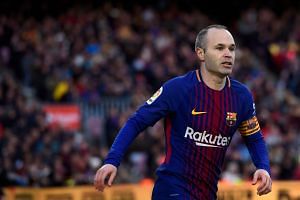 No team in La Liga or Europe’s elite club competition has got the better of Ernesto Valverde’s side this season – their only loss came in a King’s Cup first leg against Espanyol – and Conte acknowledged his side would be in for a long night.

“We must start the game with great concentration, to stay with our heads on the pitch in every moment of the game, to know there are moments where we have to suffer,” the Italian said.

“It’s not only Chelsea but every team who play Barcelona must be prepared to suffer, to be compact. Then, when we have the ball, we must have the feeling in our heads to try and create a chance to score.”

Conte said Chelsea defender Antonio Rudiger was available after being rested with muscular fatigue in a 2-1 home win over Crystal Palace in the Premier League on Saturday, meaning his only injured players are David Luiz and Ross Barkley.