SINGAPORE - Fazrul Nawaz remembers exactly how he felt when the Goal 2010 project was unveiled in October 1998.

"It was a really exciting time for boys my age," the national striker, who was 13 at the time, told The Straits Times.

"If we were to reach the World Cup in 2010, it was up to my generation. So everybody wanted to be the ones to help Singapore get there."

The plan to get the Lions to qualify for the 2010 World Cup was announced by cabinet minister Mah Bow Tan, the first adviser for the Football Association of Singapore (FAS) then, and conceived as a way to lift the standard of local football.

While some steps were taken to realise the aim, like the appointment of Dane Jan Poulsen as project director in June 1999 and the formation the National Football Academy (NFA) in August 2000, there was still much to be desired in terms of youth development.

One unresolved issue was facilities. Fazrul, who was selected for the NFA, said that all the academy's age-group teams trained and played games at the decades-old Jalan Besar Stadium, Geylang Field, and mainly the former grounds of the Christ Church Secondary School.

Jalan Besar, opened in 1932, was refurbished in 2003, while Geylang Field was refurbished only in 2015. Christ Church underwent a $47-million makeover into the People's Association's headquarters in 2009.

Fazrul chuckled as he recalled: "At Christ Church, there was only one little pipe, so the whole squad had to take turns, one by one, to shower after training.

"There wasn't even a rubber hose attached to the pipe - we players bought one with our own money."

"Goal 2010 was a dream, and at times it seemed like it remained just that - a dream on a piece of paper," said the 60-year-old, who has now retired from coaching.

"Not a lot was done, especially in terms of facilities, and funding." 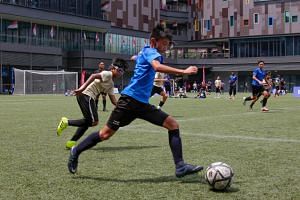 Football: Grooming a new breed of Lions for the 2034 World Cup dream

Goal 2034 is terrific big thinking, but FAS must walk the talk

The Goal 2010 dream was discarded in June 2004 by then-FAS president Ho Peng Kee, who revised the association's focus towards becoming one of Asia's top 10 sides within five years. He said that Goal 2010 became "counter-productive as we measured everything against that slogan".

The ambition was officially snuffed out in June 2008, when Singapore ended their 2010 World Cup qualifying campaign at the third round, finishing third behind Uzbekistan and Saudi Arabia, and ahead of Lebanon in their group.

However, former national skipper Seak Poh Leong, who sat on the "Youth Development" committee of Goal 2010, does not accept those who call the project a failure.

Calling such an assessment "unfair", he bemoaned critical missteps.

"For example, in 2000, they started a youth development programme created by Poulsen," said Seak. "A year later, he was pushed to the national team as head coach (after the FAS replaced Vincent Subramaniam) and there was no one to take care of the programme. That was the biggest mistake."

Seak also called the NFA a "big setback" because it narrowed the pool of players that would receive the best coaching and opportunities to represent national age-group teams. The NFA was scrapped earlier this year.

Still, 20 years on, there is a consensus that Singapore football failed to capitalise on the buzz Mah's announcement created, not just among aspiring footballers but also the wider football community.

Local football blogger Ko Po Hui was among 600 people who turned up at a Goal 2010 workshop for members of the public at the Suntec City Convention Centre, six weeks after the project was announced.

He still owns the large black binder, with hundreds of pages of preliminary findings from the various task force teams, which was distributed to the workshop's participants.

Said Ko: "It is not difficult to point out the issues constantly brought up as problematic in local football, such as poor grassroots development, national service, and quality coaching."

"But learning from this," he said, tapping his fingers on the Goal 2010 binder, "and other failed proposals like the Strategic Plan (announced in 2010), should also be key lessons ahead of any new blueprint the FAS might unveil."