ZURICH (AFP, REUTERS) - A Fifa court on Monday (Dec 21) banned Sepp Blatter and Michel Platini for eight years after finding them guilty of abusing their positions over a 2 million Swiss franc (S$2.8 million) payment that was made to the suspended head of European football.

A statement by the court said both showed "abusive execution" of their powers. In the case of Platini, the court said he "failed to act with complete credibility and integrity, showing unawareness of the importance of his duties".

The decision, which comes as a corruption scandal swirls around Fifa, means that Blatter's 17 years at the helm of world soccer will end in disgrace, and spells the end of Platini's hopes of replacing the 79-year-old Swiss in a presidential election in February. 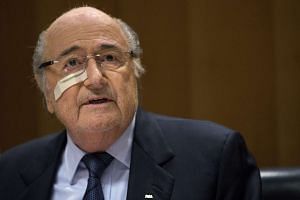 Football: Blatter to appeal Fifa ban, says he had been 'betrayed' by Fifa ethics court

Platini, a former France international who was one of the finest players of his generation and had led the European soccer body Uefa since 2002, had been the favourite to win that election until he was suspended.

The ethics inquiry began in the wake of the Swiss attorney-general's decision to open criminal proceedings against Blatter over the payment to Platini. The office is also investigating the award of the 2018 and 2022 World Cup finals to Russia and Qatar.

In the United States, prosecutors have indicted 27 current or former soccer officials, including eight former Fifa executive committee members, over allegations that they ran bribery schemes connected to the sale of television rights for soccer competitions. Twelve people and two sports marketing companies have been convicted.

Blatter said he would first launch an internal appeal against the suspension at Fifa, before taking his case to the Court of Arbitration for Sport in Lausanne.

He said he had been “betrayed” by the Fifa ethics court and was “astonished” that judges rejected evidence in his defence.

He had argued that the payment he authorised to Michel Platini in 2011 was legitimate following an oral contract, but Fifa judges said evidence of such a contract was “not convincing and was rejected”.

Blatter, speaking in English, said the ethics committee “deny an evidence and they try to build something up which is not true... Something that is not true cannot be proven”.