LONDON (AP) - Rewind a year and Arsenal was heading into the new season with renewed vigour and optimism. But ahead of the upcoming campaign there is an all-too familiar sinking feeling surrounding the club.

In 2018, Unai Emery had been appointed as head coach as the curtain came down on Arsene Wenger's 22-year reign.

There had also been improved business in the transfer market and a shake-up of backroom staff had supporters dreaming of a return to the English Premier League's top four.

A four-month unbeaten run did little to quell the expectations but, ultimately, Emery's new-look outfit came up short once more.

Stuttering over the line in the league cost it a place in the Champions League positions as they finished a point behind rival Tottenham, while a second shot at qualification ended around 4,000 kilometers away as it lost the Europa League final 4-1 to Chelsea in Baku.

Supporters began to grow restless at the lack of transfer activity in the off season, with only 18-year-old striker Gabriel Martinelli added until Real Madrid midfielder Dani Ceballos came in on a season-long loan deal.

Promising defender William Saliba was also signed from St. Etienne but he has returned to the Ligue 1 outfit on loan until next summer.

The current crop of players would have also been unsettled when then captain Laurent Koscielny refused to travel on a pre-season tour of the United States after a request to have his contract terminated a year early was rejected by the Gunners. Koscielny's move to French team Bordeaux was announced by both clubs on Tuesday (Aug 6).

Add to that a groundswell of discontent from supporters which saw fans' groups unite to issue a statement to owner Stan Kroenke calling for "better leadership" and criticising the "soulless" atmosphere at home games and a perceived lack of transfer activity and it was a turbulent off season for the club.

Seeing Edu, a former Arsenal midfielder and member of Wenger's unbeaten "Invincibles," come on board as technical director will appease some fans - especially if further recruitment follows.

But Emery now has the difficult task of turning that around with results on the pitch. 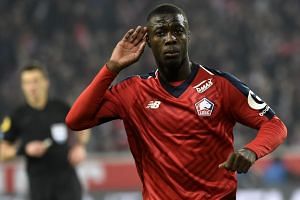 Ajax way can be right for clubs like Arsenal, United

With Manchester City and Liverpool again most people's favourites to fight it out for the title and Spurs investing and seemingly ready to build on its Champions League final appearance, sneaking back into the top four may be the best the Spaniard can hope for.

Improving the defensive unit is the key, given the club's player of the season Alexandre Lacazette and Premier League golden boot winner Pierre-Emerick Aubameyang are again likely to provide plenty of ammunition at the other end of the pitch.

Losing Aaron Ramsey on a free transfer to Juventus was another difficult pill for supporters to swallow over the summer, even if they had been aware of his impending departure for some time.

The Welshman has not yet been replaced and Emery will now need to get more of a consistent tune out of Mesut Ozil in the hope of filling a massive hole in his team.

All in all, it promises to be an interesting nine months at the Emirates Stadium in Arsenal's quest to return to Europe's elite - and the question of whether this current squad belongs there or not will certainly be answered during that time.