We talk about which old building, old monument should be preserved as part of our national heritage - but sometimes we must look at what is not there… no structure, just a space.

Can you imagine building flats where the Padang stands? The Padang is empty space, yes, but unarguably the nucleus of all Singapore history.

So too Farrer Park, a space with almost as much history as the Padang.

Singapore's first racecourse, set up in 1842, was at Farrer Park. The middle of the track doubled as Singapore's first golf course and first rifle range (I don't think they held their medal rounds on the same day!).

The first airplane to land in Singapore, flown by Ross Smith on the pioneer trip linking England to Australia, touched down on the old racecourse on Dec 4, 1919.

My future father-in-law Claude Oliveiro (1905-1990) told me he was in the crowd round the Vickers Vimy biplane as his home was at the edge of the course.

Sadly, the kampung culture that filled the space that was Farrer Park can, of course, never return. We have moved on.

Home for him from teen to husband was a house along Race Course Road: "We lived right across from the turf club and golf course. We boys sneaked onto the course in the late evening and played golf with old, discarded clubs.

"We were often chased off by Mr Finlayson, manager of the bus company, after whom Finlayson Green is named."

In 1924, the racecourse was renamed the Singapore Turf Club and remained at Farrer Park for a further nine years before it moved to Bukit Timah.

Farrer Park was then opened to the public. Playing fields were created and a sports house came into being in what used to be the grandstand. The space was now truly the people's favourite sporting venue and remained so for decades.

Farrer Park also saw its share of political gatherings. In 1942, following the fall of Singapore, Indian soldiers were mustered there and urged by nationalist Subhas Chandra Bose to switch allegiance.

On Aug 15, 1955, the People's Action Party campaigned there for self-government. The rest is history, with Farrer Park a part of that history.

My connection to Farrer Park covers the years from 1910, when Claude started living there, to 1955, when I moved out of a house alongside Farrer Park which had been my home for 10 years.

Yes, I stayed a javelin-throw away in Dorset Road, with Claude and his family my neighbours. He became my father-in-law when I married the girl next door 57 years ago.

I played hockey every evening on the fields and cricket on weekends in an unused corner.

I watched football hopefuls train under legendary coach Choo Seng Quee who lived a discus-throw away from Farrer Park. In the evening, I savoured the feats of stars like the extraordinary striker Awang Bakar.

I put classmate Wilfred Skinner through his goalkeeping paces at Farrer while reading the coaching pages in the book Football From The Goalmouth by England giant Frank Swift. Skinner became Singapore's best goalkeeper ever. Swift died in the tragic Munich crash. Skinner passed away in Canada.

Joe Dorai, another friend and colleague, just had to look out of his home window to see the games going on a shot put away at Farrer Park. No wonder he became one of our most passionate football writers during his years at The Straits Times. Sadly, Joe died last year.

I keep harking back to the good old days because, for me, my fondest memories of playing sport will always be those rapturous times on Farrer's fields.

There were 16 or so of us kampung boys; we were so young, so carefree, so happy as we played. In the gathering dusk, we had time for a final dribble, a feint to the right, cut to the left, a quick shot, a jubilant score between the kerosene-can goal posts.

Simplistic? Well, let me tell you that gang of ours produced three internationals. 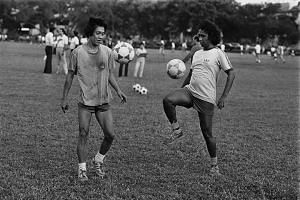 Farrer Park redevelopment: The death of a field of dreams dims a city's sporting spirit

If you ask me how many Chinese, Malays, Indians, Eurasians made up this motley crew, I would have to think very hard before an answer, simply because I had never thought about this before.

We were just kampung pals, young Singaporeans first and foremost who just happened to be Chinese, Indian, Malay, Eurasian when we got home and ate our food and said our prayers - and this long before Singapore was even our own.

Sadly, the kampung culture that filled the space that was Farrer Park can, of course, never return. We have moved on.

But don't take away the little that is left of Farrer Park. Let some of it remain, a tangible space that has meant so much to Singapore and so many in innumerable, intangible ways.

• David Kraal, an 81-year-old Singaporean, is a former associate editor and former sports editor of The Straits Times, ex-Editor of The Sunday Times and ex-founding editor of New Nation.