SINGAPORE - The fans growled "ohhhhhh" in unison, building up to a crescendo as Paul Lim launched his outshot.

Much like the "yam seng" wedding toast, such anticipation is growing into a "tradition" for the Singapore darts ace these days. At the Dec 13 to Jan 1 PDC World Darts Championship in London, for instance, he was also serenaded with a chant familiar to football fans.

Such enthusiasm by fans is increasingly common in recent years, leading to divided opinions between traditionalists, who want a return to darts' more muted days, and those who say the sport must evolve to entertain fans, or risk losing audiences and the big bucks that come with such growth.

Singapore's leading darters, Paul and Harith Lim who are not related, are themselves split on the issue. They compete on the PDC Asian Tour and Dartslive electronic darts circuit and stunned Scottish top seeds Gary Anderson and Peter Wright 5-2 in the first round of the 2017 World Cup of Darts.

Paul, 64, prefers more decorum, even if he has learnt how to deal with the rowdiness.

While he appreciates the support and that the atmosphere "makes for good TV", he said: "There is no right or wrong, only personal preference. I remember how the hall was silent when players were at the oche in the early days. 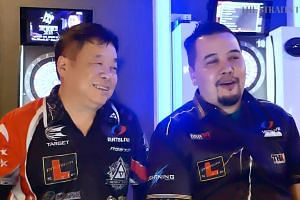 "But now, fans are allowed to drink and they want to have fun. It is just like a football or basketball match, where the crowds are encouraged to cheer or whistle.

"It is still rather quiet at World Darts Federation events.

"But this is the way PDC events are heading and there is no turning back now. Maybe for other non-PDC major tournaments, there could be certain rules about decorum. But short of throwing people out, it would be hard to police."

The formula of sports and entertainment seems to make sense for darts. PDC had a total of £11 million (S$19 million) in prize money for all its competitions in 2017, five times more than the amount in 2007. Some 1.4 million people in Britain and 2.7 million in Germany watched the 2017 World Championship final while the prize purse hit a record £2.5 million last year.

In Singapore, the growth of the sport is aided by companies such as Dartslive, whose network machines allow players to compete against anyone in the world.

The Dartslive Official League, which comprises several tournaments, is the biggest darts competition in Singapore. The Super League is the main one, with close to 2,000 darters from 252 teams competing in its 15th season last year. The inaugural season in 2011 had 300 players from 40 teams.

Harith, 48, said: "The electronic darts scene has taken off in the last few years with Dartslive machines' popularity and interactive gameplay. This has definitely helped to raise the interest levels and base of players in the region."

Thus, he felt the mix of sports and entertainment is necessary to continue growing the sport.

Former world youth champion Harith said: "The fans buy tickets to be entertained. If there is no crowd, there will be no sponsors, which means no prize money, and there will be nobody playing for a living.

"From 2003 to 2011, I did not play steel-tip darts because the sport had gone stale and there was not much interest. Now, there is excitement and something to look forward to, as it is no more boring and most of us enjoy the atmosphere."

However, he acknowledged that the boisterous atmosphere can have an impact on the action, saying: "The noise can be daunting for a first-timer and those who adapt fastest have an edge."

But the duo said that they draw the line at darters going over the top to gain a perceived advantage.

In London last month, James Wade was accused of thuggish behaviour when he shouted at Seigo Asada during his second-round win. He later apologised.

Paul said: "If you are expressive towards yourself or the crowd, it is okay, but aggression towards opponents is uncalled for."

Harith added: "I have met some who deliberately delay their shots, or cut across my path just to try to put me off.

"If it is nothing personal, it is okay. After all, you do need some bad boys in sports. But if it goes over the top, the organising body will have to issue warnings."