LARUNS, France (AFP) - Britain's Geraint Thomas said the Tour de France crown he is expected to secure on Sunday (July 29) has come down to "hard work", and not the performance-enhancing drugs or methods that have crippled the sport for years.

Thomas' second-place finish behind Slovenian Primoz Roglic on Friday's 19th stage stretched his lead over Dutch rival Tom Dumoulin to 2min 05sec on what was the final day of climbing in the high mountains.

He now only needs to make sure Dumoulin, or third-placed Roglic (2:24) don't upset his plans to become Wales' first Tour champion by overcoming their respective deficits during a "really tough" time trial over 31km on Saturday's penultimate stage.

Barring catastrophe, the 21st stage and final stage from Houilles to the Champs Elysees is likely to see Thomas feted as the successor to four-time and defending champion, teammate Chris Froome.

What would also be Sky's sixth Tour de France triumph from the past seven editions would do little to appease the team's detractors, especially as Froome was only cleared to race at the 11th hour when the International Cycling Union (UCI) cleared him of wrongdoing following a lengthy, but unresolved anti-doping investigation.

A sample from Froome, a six-time Grand Tour winner, taken at last year's Vuelta a Espana revealed twice the permitted amount of salbutamol, normally used to treat asthma, in his body.

Thomas was quick to underline his clean approach to success. 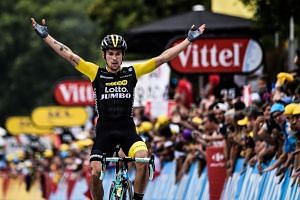 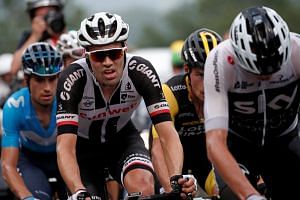 "I don't know. What can you say," said Thomas when asked whether his team's successes were credible.

"We train super hard. There's nothing I can say to prove it. It will stand the test of time, I guess."

Sky's domination of the race in recent years, including this 105th edition in which Thomas impressed by winning back-to-back stages in the Alps, has given fuel to the British outfit's detractors.

But Thomas added: "The team here is super strong, just look at the individuals we have... guys who are very strong in the (one-day) classics, climbers like Egan Bernal, who is the brightest climbing talent in a long time.

"The team is just phenomenally strong.

"It's not just about having good legs. You need good heads as well. We ride together really well, we don't panic. Today, we really showed that.

"There's nothing more I can say really say except I work really hard. I've had some bad luck. It's nice to see that my hard work is paying off."