Froome, 34, was taken to a local hospital after hitting a wall during a course reconnaissance of the 26.1km individual time trial around Roanne in central France, with team doctor Richard Usher confirming he also suffered a broken elbow.

"Chris was taken to Roanne Hospital where initial examinations confirmed multiple injuries, most notably a fractured right femur and right elbow. He has also suffered fractured ribs," Usher said in a statement.

Team Ineos said that Froome was being airlifted to St Etienne University Hospital for further treatment.

"On behalf of the team, I would like to commend the treatment he received from the emergency services and all at Roanne Hospital in assessing and stabilising him," he said.

"It's a very serious accident. Clearly, he won't be at the start of the Tour de France. It'll take quite a long time before he races again," Brailsford told French television.

"He crashed in the downhill section of the course at high speed. He hit a wall."

Chris is in surgery at the moment to repair the multiple fractures, please keep him in your thoughts. I hope to be able to share a message from him tomorrow morning - MF

Brailsford later added in the statement that the team's primary focus was ensuring that Froome gets the best care.

"One of our big strengths on this team is coming together in difficult moments, and we will ensure we do everything possible to support Chris and his family," he said. 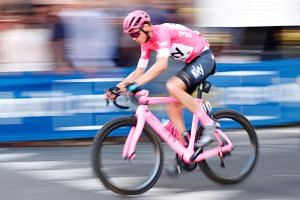 "Even though we all recognise the risks involved in our sport, it's always traumatic when a rider crashes and sustains serious injuries.

"One of the things which sets Chris apart is his mental strength and resilience and we will support him totally in his recovery, help him to recalibrate and assist him in pursuing his future goals and ambitions."

Six-times Grand Tour winner Froome was competing in the Criterium du Dauphine to prepare for the Tour de France, which begins in Brussels on July 6.

He would have been chasing the victory that would have seen him equal the record five Tour de France wins of Jacques Anquetil, Eddie Merckx, Bernard Hinault and Miguel Indurain.