PARIS (AFP) - A defiant Chris Froome insisted he is out of rehab and back in full training, focused on being in prime shape and at the starting line for the 2020 Tour de France in July.

The four-time Tour de France winner is in Gran Canaria for his first official training camp since he fractured a thigh, elbow and vertebrae in a high speed horror crash in June 2019.

Speaking from the Spanish island training camp, Froome promised that "come that start line in Nice... I'll be ready to go".

There had been fears Froome, who turns 35 in May, would struggle to be fit for the 2020 Tour when he showed up for the route unveiling still limping heavily in October.

But in November, the Briton had his final surgery to remove screws and a large metal plate from his right hip and began full rehab.

In an interview with the Team Ineos website the man who spearheaded what used to be Sky by winning seven Grand Tours says the prospect of a record-equalling fifth Tour de France is what has kept him going.

"I'm in Gran Canaria for my first official training camp of the season," said Froome.

"I've been given all the green lights," he beamed.

"I'm making the transition from rehab to training and feel fortunate to be back on a bike again.

"The next few months will be tough, I need to get stuck in to training. This period is about getting in the hours and getting in the kilometres," said Froome, who often races in February having started training earlier.

"The only appointment I have set myself is the Tour de France and until then I'll keep chipping away trying to make the most of every camp and every race building up to July."

The Tour de Fance (June 27-July 19) actually starts a week earlier than usual in 2020 to accommodate the Tokyo Olympics. 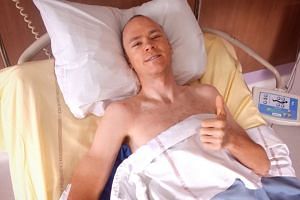 Cycling: Chris Froome happy to be alive as he targets fifth Tour title

"(I) hope that come that start line in Nice in July I'll be ready to go."

Froome made no secret of his ambition to equal the five Tours de France won by Eddy Merckx, Jacques Anquetil, Bernard Hinault and Miguel Indurain.

"The prospect of going for a fifth yellow jersey is just massive for me," he said, echoing a frequent mantra.

"There are no guarantees in sport, no guarantees I'll be back to challenge for it (TDF), but I'm going to give it absolutely everything I've got."

But he also shepherded Welshman Geraint Thomas to a hugely popular victory in 2018 before Colombian whiz-kid Egan Bernal became his first winner under Ineos colours in 2019.

Last week Brailsford, playing his Froome cards close to his chest unveiled his Grand Tour line up from a hugely competitive Ineos roster.

"As it stands," Brailsford said, "Geraint and Egan (will) take on the challenge and focus on the Tour (de France)."

With regards to Froome, Brailsford said his star was "craving that big fifth win".

"He's working very, very hard at the minute to get back to the level required to be competitive," he said.