GOLD COAST (Australia) - A Singapore athlete has been banned from competing at the ongoing Commonwealth Games in Australia after a positive doping test.

The athlete in question is para-sprinter Mohammad Khairi Ishak, who was due to compete in Friday's (April 13) men's T47 100m final at the Carrara Stadium on the Gold Coast.

The 28-year-old, who won a silver (T46 100m) and bronze (T46 200m) at last year's Beijing World Para Athletics Grand Prix, has not travelled to Australia and is in Singapore.

According to his profile on the My Active SG website, Khairi was also the T46 100-200m double gold medallist at the 2013 Singapore Disability Sports Council's National Para Track and Field Championship.

In a statement, Mark Chay, Team Singapore's chef de mission at the Games, said: "We were informed by Anti-Doping Singapore that Mohammad Khairi Bin Ishak has been issued a provisional suspension as a result of a violation charge, hence ruling him out from participating at the Commonwealth Games.

"We wish to remind all athletes to play a part in clean sport, stay drug-free and to respect the rules in place."

Kevin Wong, president of the Singapore Disability Sports Council, told The Straits Times: "We would agree that it's important to stay drug-free. 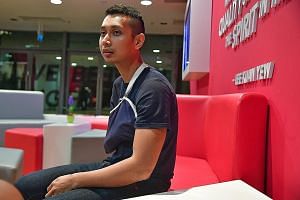 "For Khairi, his case is under appeal and let's wait for the appeal outcome.

"It's the responsibility of every athlete to be mindful of what they consume. If they are not sure, they should avoid (it) and seek clarification."

He added that 2,600 Australians and 500 international athletes had been tested in the lead-up to the April 4-15 Games, on the back of funding from the Australian Government.

He said 371 tests were conducted on the back of intelligence reports in the three months preceding the Games.

He also noted there had been no positive tests so far at the Gold Coast Games, which ends on Sunday.

Commonwealth Games Federation medical commission head Dr Mani Jegathesan said the three banned Australians featured in a group of "less than 20" athletes from around the Commonwealth to be banned.

In an article dated April 3, 2018, on the DHL website, which features Khairi and is titled "Call center agent by day, para athlete by night", it notes that Khairi does track training three days a week for two hours and uses the office gym for strength training twice a week.

It notes that an accident in 2011 had left him with permanent disability in his right arm.

In the article, quoting his advice for younger athletes, he said: "Many of them don't dare to take the first step. My advice to them is to go ahead to challenge themselves and see how it goes."

At the bottom of the online article, an update dated April 5 read: "Due to injury, Khairi has been withdrawn from the Team Singapore contingent and will not be competing at the 2018 Commonwealth Games."

Singapore's original contingent for the Gold Coast Games had featured 60 athletes competing in 11 sports. They have won two golds, one silver and one bronze so far at the Games.

There have been previous cases of Singapore athletes failing doping tests.

In 2013, former silat world champion Saiedah Said, then 28, was banned for two years after the 2005 Sportsgirl of the Year tested positive for the banned substances Nor-Sibutramine and OH-Nor Sibutramine, which are oral anorexiants, or appetite suppressors.

She failed the test at the 38th National Pencak Silat Championships on April 14, 2013.

In 2012, seven Singapore bodybuilders were slapped with two-year bans after testing positive for prohibited drugs in a local competition that year.