The win proved sweet for Lee, the three-time Olympic silver medallist, who had won their previous four encounters before falling to Kidambi in the singles match of the mixed team final on Monday. India went on to win 3-1 and claim the gold.

Lee said: "This is one of my most memorable achievements because this will be my last Commonwealth Games.

"I know how important this gold medal is for Malaysia. I won this for the whole Malaysian badminton team."

The match had initially swung Kidambi's way. The Indian showed greater composure at 19-19 in the opening game and won the next two points to seize the lead.

It was similarly tense in the second game, which included a 42-stroke rally won by Kidambi, as the scores were tied seven times until 9-9 before Lee took control. He won 12 of the next 17 points to level the match while his supporters stamped on the metal steps in union and shouted "Malaysia boleh" repeatedly.

Kidambi continued to commit unforced errors in the deciding game and quickly fell behind 1-7 and 10-18 before one last mistake ended his bid for the gold medal. 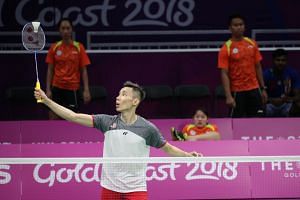 The Indian, who had replaced the injured Viktor Axelsen as No. 1 on Thursday, said: "He (Lee) was moving a lot better today than our last match. Somehow I lost momentum in the second half of the second game and he played well from there."

On his match against Kidambi in the team event, Lee added: "I lost to him in the mixed team event and I wanted to come back in the individual event. It's not easy mentally.

"In one week, I played him two times in finals. The first time I lost and the second time is the final in the individual. I think mentally I was very, very strong.

"I just came out and I forgot the team event and just focused."

On the 10-year age difference between the two of them, he said: "It's only a number, right. I just forget my age."

Lee won the Commonwealth singles title in 2006 and 2010 but skipped the 2014 Glasgow Games. He has said this will be his final Commonwealth Games and he will not compete at the 2022 Birmingham edition.

Kidambi had replaced the injured Viktor Axelsen at the top of the men's singles world rankings on Thursday.

He joins an exclusive club of Indian shuttlers to sit at the summit of the sport - Saina Nehwal became the women's singles world No. 1 in 2015, while Prakash Padukone was considered the world No. 1 when he won three top tournaments in 1980, before the current computerised ranking system.

In the women's singles final, which was an all-Indian affair between Saina and P.V. Sindhu, the former triumphed 21-18, 23-21.

It was Saina's second Commonwealth Games singles title after her victory at the 2010 Games in New Delhi.