GWANGJU, South Korea (NYTIMES, AFP) - A doping cloud has long hung over this sport and one of the world's best swimmers, and at the world championships this week, it finally burst, submerging the event in silent and sullen protests directed at Sun Yang of China, a six-time Olympic medallist.

The Chinese collected his 11th world championship title on Tuesday (July 23) after the apparent winner, Danas Rapsys of Lithuania, was disqualified for moving on the blocks at the start of the 200 metres freestyle.

Every sport needs a villain, and in swimming, a sneering Sun seems content to be that person. After each win, the swimming world directs its anger at him as the symbol of everything that is wrong with the sport.

Sun, 27, who seven years ago in London became the first man from China to win an Olympic swimming title, has brought much of this anger upon himself, beginning in 2014, when he served a three-month suspension after testing positive for trimetazidine. He could have obtained a therapeutic use exemption (TUE) to use the stimulant legally to treat a heart condition. But Chinese doping officials are believed to have failed to update their TUE for athletes.

Horton and Sun then clashed at the 2016 Olympics. The Chinese was said to have splashed water at Horton during a practice session, just days before they faced off in the men’s 400m freestyle.

The Australian was reported to have said in response to that incident: “I ignored him, I don’t have time or respect for drug cheats.”

Later, he added: “I just have a problem with athletes who have tested positive and are still competing.”

That clash in Rio triggered a war of words and almost threatened to spark a diplomatic row as China’s state-run media called Australia a “second-class citizen” of the West and accused it of “white supremacy”.

On Sunday, the Australian Mack Horton refused to join Sun on the medals podium and dignify Sun’s victory in the 400m freestyle. The reigning Olympic champion, Horton, 23, finished second, then stood silently behind the podium, an act that earned him a public reprimand from Fina, the sport’s international governing body.

The China Daily weighed in on the pair’s latest run-in on Tuesday, claiming Horton had “humiliated himself” with his protest. “Needless to say such moves are rather rude and lack the most basic manners,” it added in a commentary. “Not joining Sun on the podium was not a protest, but an insult.” 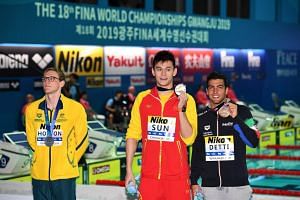 That did not stop Duncan Scott of Britain from entering the fray on Tuesday during the medal ceremony for the 200m freestyle. Scott, who tied for third, refused to shake Sun's hand or pose for photographs with the winner after the medal ceremony.

The Chinese then pointed at Scott's chest as they left the pool area and appeared to shout: "You loser, I'm winning, yes!"

He then continued goading Scott, who smiled and kept walking.

Sun was not made available for a news conference because he was stuck in a routine post-race drug test. If there was any doubt, it seems clear now that he will continue serving as the star whose history illuminates the complications of cleaning up the sport, in part because of his own behaviour.

He had invited more scrutiny last September when he smashed a vial of blood with a hammer to prevent anti-doping test collectors from leaving his home with a sample.

Horton and Scott have been praised by some fellow competitors. American Lilly King, winner of the women’s 100m breaststroke, has been outspoken in her disdain for drug cheats and Fina, whose efforts to clean up the sport she finds severely lacking.

“What he (Scott) did was incredibly brave,” she said, noting that he surely will face consequences. “Fina has currently done more to reprimand Mack Horton than they have to reprimand Sun Yang.

Whether that is true no longer seems to matter to many top swimmers, especially those from the United States, Australia and Britain. Sun was just a toddler in 1994 when 10 Chinese swimmers tested positive for performance-enhancing drugs. China was subsequently barred from the 1995 Pan Pacific Swimming Championships, and the incident created a lingering veil of suspicion in the West.

While Sun’s method of rendering the test null and void was extreme, it is not unheard of for athletes to express discomfort with some aspect of the testing process.

Travis Tygart, chief executive of the US Anti-Doping Agency, said athletes sometimes baulked at providing a sample for various reasons, and when that happens they are encouraged to contact a doping official to talk through their concerns.

In an e-mail exchange, he said: “I’ve probably talked to 12 to 24 over the past 10 years to explain the process and answer any questions. (But) never have we had a sample being given and then destroyed by the athlete.”

Athletes tend to approach drug tests with the same attention to detail as pilots carrying out their pre-flight plane inspections, and for good reason: A positive result can ground careers and ruin reputations.

Nathan Adrian, an eight-time Olympic medallist, said there have been times when he has reached out to USADA officials for clarification about some aspect of the testing procedure. And if he was still discomfited by the collection process?

"I would follow the doping control officer and not let that sample out of my sight until it was at the FedEx station and gone,” Adrian said. “And on the way I would call USADA and find out if the paperwork was legitimate.”

In Sun’s case, an independent panel heard arguments from both sides and then ruled in his favour. Sun’s refusal to provide a sample did not violate anti-doping rules, it said, because the collectors failed to provide the proper validation papers required to draw blood under the International Standard for Testing and Investigations.

“It was probably a very tough call and the tie went to the athlete,” Tygart said.

The World Anti-Doping Agency is pursuing a more severe punishment for Sun from the Court of Arbitration for Sport, the sports world’s ultimate judicial body, but the hearing is not until September.

Horton, angered that Sun’s case was not resolved before this competition, carried out his podium protest with trepidation because of the consequences he knew would be coming.

“I was aware that the Australian athlete had dissatisfaction and personal feelings toward me,” Sun said, through an interpreter, after his 400m freestyle victory.

Explaining that his anger has more to do with the Australian’s refusal to stand on the podium for the Chinese national anthem, he added: “Disrespecting me is OK, but disrespecting China was very unfortunate and I feel sorry about that.”

King said she watched athletes from all over the world applaud Horton when he entered the dining hall on Sunday night.

But Horton drew criticism in other quarters. Richard Ings, former chief executive of the Australian Sports Anti-Doping Agency, said in a tweet that his compatriot deserved to be fined for his behaviour.

In a radio interview on Monday with the Melbourne-based Sports Entertainment Network 1116, Ings described himself as “no great fan of Sun Yang,” but said, “I do believe that athletes are treading a very treacherous path if they are making allegations against other individuals that they cannot substantiate”.

After his preliminary swim on Tuesday in the 800m freestyle, Horton sidestepped questions about his protest. “The focus now is the team’s performances and making sure we get through the week,” he said.