That mark was just enough to eclipse the old record of 72-10 set by Michael Jordan and the Chicago Bulls in the 1995-96 season.

Six months of monumental, sustained excellence have proved that the 2015-16 Warriors deserve to be mentioned among the greatest NBA teams of all time. To go through an 82-game NBA season without losing two in a row is testament to their unique playing style that has confounded defences all around the league. 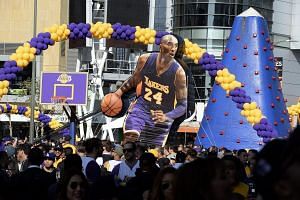 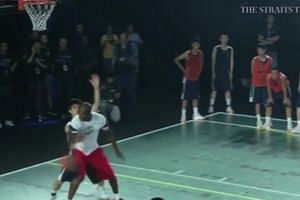 NBA: Kobe Bryant scores 60 points in his final game to lead Lakers to 101-96 win over Jazz 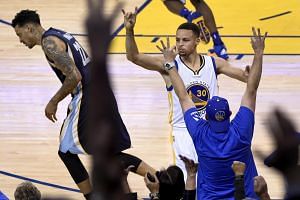 Usually, NBA teams are built with only one long-range sharpshooter in the starting line-up. This is because the three-point shot is still being viewed as a low-percentage attempt, and players are encouraged to muscle their way closer to the basket before launching a shot that is more likely to go in.

However, the Warriors chose to go the other way and have two sharpshooters - Stephen Curry and Klay Thompson - instead of one.

With both players launching an unprecedented number of three-point attempts - and making a good percentage of them - team defences are forced to spread out wide to smother them at the three-point line.

This means other Warriors could take advantage of the space created to take high-percentage shots of their own. As the season progressed, Curry was also able to extend his shooting range to outrageous distances like right after the half-court line, and push the Warriors to near invincibility.

But what sets these Warriors apart from the 1995-96 Bulls is their effortless fun in gunning for the record. Unlike the Bulls who wore teams down with tough defence and Jordan's singular excellence, these Warriors play an uptempo game and pass the ball unselfishly around. While they play good defence, it is their superb offensive game that sets them apart all season long.

So the Warriors will march on to the NBA post-season with home-court advantage throughout the play-offs. They will need to win their second consecutive NBA title to cement their status as one of the best of all time. And if Curry and Co continue to have their hot streak, they will be celebrating again come June.