SINGAPORE - Delvin Goh is angry and hopes the rest of his Singapore Slingers teammates are as upset as him after they failed to win Game 4 of the Asean Basketball League (ABL) Finals and seal the championship.

That loss to CLS Knights Indonesia last Saturday (May 11) levelled the series at 2-2 but the Slingers have another chance to clinch the title as they host the decider at the OCBC Arena on Wednesday (May 15).

Goh said the Slingers will channel the setback in Surabaya, where they were let down by poor defending and foul trouble, into a positive reaction and the squad are fired up.

"We had a great chance to finish it off in Surabaya but we didn't handle things well, we didn't come on confident enough," Goh, 23, told The Straits Times.

"But I'm angry and I hope everyone's angry we didn't get the job done and they're eager and determined to win.

"Anger is definitely one thing that's going to push us harder and I also tend to be more aggressive. We just have to bring that anger and aggression, channel it the right way, and go in and knock them out."

The 2.01m forward was also part of the team that lost to Westports Malaysia Dragons and Hong Kong Eastern Long Lions in the ABL Finals in 2016 and 2017 respectively. 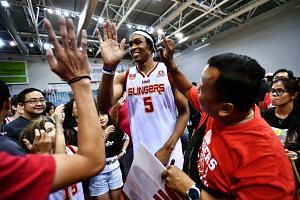 Time to sling out the iPads and be part of a real, roaring crowd

Basketball: 10 facts about the Singapore Slingers you probably didn't know

Goh, who is averaging 7.3points and 5.2 rebounds in this season's play-offs and has established himself as a key player, said: "The past two times ahead of the Finals, we weren't as ready and didn't train as well compared to this year.

"Now our training and intensity before the Finals have been good. I think we're more prepared this time and we just have to keep fighting, even when we're down during the game, until the final buzzer."

Slingers coach Neo Beng Siang said the experience of those near-misses will help but stressed the team's focus was solely on the upcoming Game 5and what they needed to improve.

He said: "We gave the Knights easy treys (in Game 4) and the Knights rely on those. If you let them make a couple of those, they will get more confident then we will struggle and it'll be pretty hard to stop them after that.

"On the defensive end, we need to limit their treys. Don't give them open shots, be more active near the post and I think we'll be fine."

Having the bulk of the sold-out 3,143 crowd supporting them will also be a boost, said forward Xavier Alexander, who has been with the Slingers since 2014.

He added: "The evolution of the Slingers fans has been great to see. We went from barely having people in the stands to selling out and adding stands now.

"They always have our backs by cheering for us and it's always good to play in front of our home crowd.

"We just have to play good defence and let that build our offence. Remembering the feeling of losing after Game 4, we don't want to feel that again so we're looking forward to winning at home."